All Done With It

All Done With It 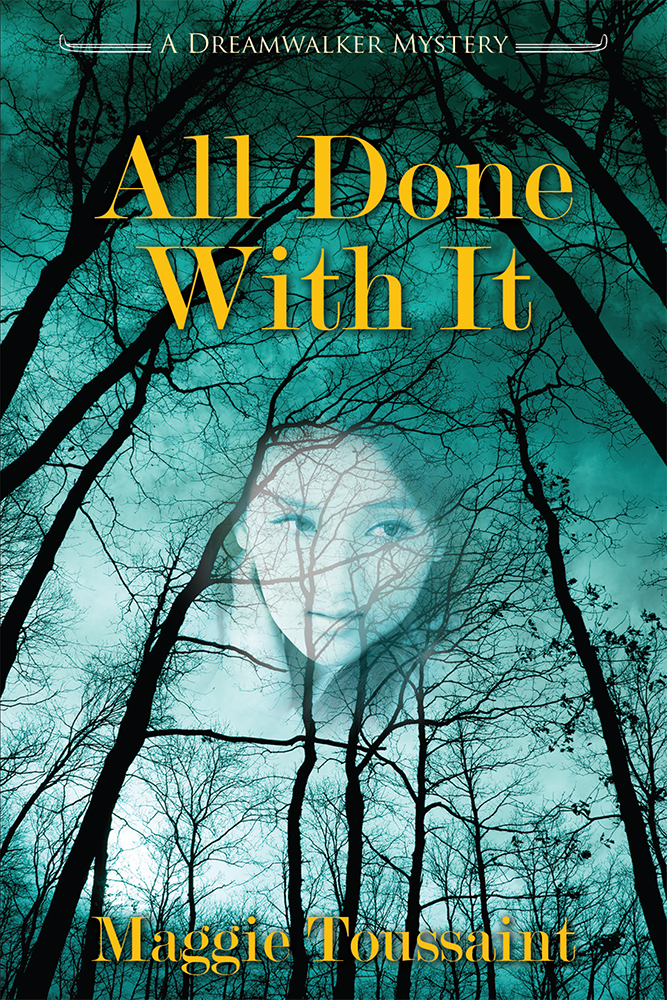 A Jane Doe jogger homicide near the swamp mystifies Dreamwalker Baxley Powell. The petite woman carried no ID, and no one recognizes her. Worse, a shadow passes from the body to a deputy, rendering him unconscious. The deputy and the corpse are dispatched to the hospital and morgue, respectively.

With summer heat and pending childbirth on her mind, Baxley’s dreamwalks into the spirit world fail to yield leads, frustrating Baxley and her deputy husband, Native American Sam Mayes. Days later, Jane Doe’s description matches a missing Mississippi woman. Turns out, her new husband is missing too. Jane’s sketchy brother-in-law and her aunt arrive, full of secrets. At Jane’s campsite, the team encounters a terrifying anomaly, nullifying Baxley’s senses. With such danger present, they must protect their unborn child. No more dreamwalks will occur until Baxley gives birth.

When her friend Bubba Paxton vanishes, Baxley sights him in a mirror, trapped between worlds with other souls.

Meanwhile, the shadow invades other hosts, demanding to see Baxley. Mayes and Baxley ignore the shadow as they rescue Bubba, untangle the Jane Doe case, and handle missing persons reports.

To free the trapped people, Baxley must outwit a powerful foe. Can she stop this super villain before he steals her soul?

In this 7th Dreamwalker Mystery, female sleuth and psychic crime consultant Baxley Powell works a homicide case that leads straight to an evil force in the spirit world. The stakes? Her soul, her unborn child, and humanity’s freedom.

Books from this series have finaled in the Georgia Author of the Year Awards and have won Silver Falchion Awards.

Listen as Karla Brandenburg interviews me in this July 14, 2021, audio-only podcast about my paranormal Dreamwalker series!

“WOW. I have no other words. This book consumed my reading time, quickly becoming a page-turner as I could not put this book down until all was said and done.

Ms. Toussaint knows how to tell a story that had me immersed in all that was happening within the pages. This was a well-written, fast-paced, and action-packed drama that encompass all the previous books in the series and culminated in a no-holds-bar tale that brought everything together in one explosive act. From the murder to the suspects to the entity harming the townspeople, our heroine is doing as much as she can to solve this deep-down puzzling case. There were a few tense moments that played havoc with my emotions as I followed along with what the author intended. Some powerful scenes were found in the confines of this multi-plot story and as the drama progressed, the frenetic pacing set the stage for climatic conclusion and again, wow. This is by far the best book in this series and I’m so happy that I got to know Baxley, Lacy, Tab, Larissa, Wayne and Mayes.” —Dru’s Book Musing

“One might think that the 7th book in a series would require prior familiarity with some or most of the others, but that’s not the case. All Done With It‘s ability to build on the prior books, yet remain accessible to newcomers, makes it a highly recommended cozy paranormal mystery pick for both audiences, easily available and compelling.”—Donovan Literary Services for Midwest Book Review.

“Several murders set the stage for a supernatural end game in this fast-paced paranormal mystery. Dreamwalker Baxley Powell is nearly at term with her pregnancy when a demon from the underworld threatens her loved ones. Meanwhile, random victims are being kidnapped and held in a mysterious realm. Trying to save these people stretches Baxley’s resources and saps her energy. She must summon all the help she can get, including an undercover angel and a ghost dog, to help her defeat this ultimate threat to humanity. All Done With It is an enthralling read that offers a satisfying conclusion to the Dreamwalker series.”—Nancy J Cohen, author of the Bad Hair Day Mysteries

“Murder. Disappearances. Possession. Baxley and Mayes deal with human crimes and paranormal threats while awaiting the birth of their son. Nine months pregnant, Baxley is ready for change. But signs indicate that the changes coming may not be what she bargained for. This story is very satisfying and fulfilling for those who have been following the Dreamwalker series.” —Pat Dupuy, Goodreads reviewer

“Baxley Powell Mayes is back, and she’s nine months’ pregnant! Her condition doesn’t stop her from stepping in to help solve a murder, but Baxley’s otherworldly senses are clouded by the location of the crime scene. Other abnormalities in the rift between this life and the next send up an alarm, and in an effort to keep herself and her family safe, husband Sam Mayes discourages her from “dreamwalking.”. As the story unfolds, Baxley and her extraordinary family must each play a role in closing a tear in the world or risk losing a mortal battle to a sinister foe.

The reader walks along with Baxley in those final, uncomfortable days prior to delivering her child. She must fully trust the people she loves most, surrendering a part of herself to the greater good, and making soul-deep decisions between good and evil. She holds the fate of the world in her hands, and making a wrong choice could be the end of life as the world knows it. For those who have followed the Dreamwalker series, this one holds the ultimate answers. Who is Rose and is she friend or foe? All answers are revealed in the satisfying conclusion.” —Karla Brandenburg, author and reviewer

“Five Stars! The mystery of what the shadow is, saving the world from annihilation and waiting for her baby to be born has made Baxley’s life a whirlwind of drama, evil, and a reappearance of a past enemy not exactly how I would want to spend my ninth month of pregnancy but if anyone can overcome everything that is happening it is Baxley or is she finally facing an evil even she can’t stop.”.—Linda Tonis for Paranormal Romance Guild

Raindrops pooled in the dead woman’s bellybutton. Her bare midriff gleamed like burnished mahogany. The gray sports bra, running shorts, sneakers, and lean physique suggested she liked to run. Tight curls framed her face like a dark orb, and her amber eyes stared vacantly at the sky.
Definitely a young adult, possibly late twenties like me. I’m Baxley Powell Mayes, Dreamwalker and relatively new crime consultant for the Sinclair County sheriff’s office. My extrasensory talents focus on communicating with the dead and helping the living. I’m also good at observing crime scenes such as this one on Henderson Road in Sinclair County, Georgia.
With the midday thundershower topping off the already high water table in the nearby swamp, the weedy lawn oozed water where I stepped. I leaned forward over my very pregnant belly to study the abrasion near her elbow. It looked fresh. I stepped back from the body and waited for my crime consultant assignment.
“The parcel delivery guy called this one in,” Sheriff Wayne Thompson said, emerging from his Jeep and striding our way.
My boss still bore the muscular carriage of an athlete from his high school quarterback glory days and the arrogance to match. Though he wasn’t the easiest person to work for, I respected his authority.
“Lucky for us, the rain stopped by the time we arrived.” Wayne gestured at the body. “Mayes, give me your perspective of the victim.”
My husband, Deputy Sam Mayes, stood beside me in his khaki uniform, his Cherokee heritage evident in his high cheekbones, striking long black hair, and dark brown eyes. Like me, he was a Dreamwalker, though he had hidden depths I had yet to fathom.
He was also my second husband, my first having disappeared during his military service a few years ago. Last fall, Mayes helped me locate my missing husband’s consciousness in a tween place, and together we eased his concerns and showed him how to enter the afterlife. Even so, it took me a while to accept Mayes as a fixture in my life. I’d had doubts about the wisdom of a long distance relationship since he had a job and tribal responsibilities in north Georgia. He’d been certain I was the one for him. Needless to say, he’d won me over, and we were happily married and living in my coastal Georgia home.
Mayes moved forward, stepping where I’d stepped in the unkept grass. “African American female, about five seven and one-twenty pounds. No ID in sight. No bullet or stab wounds mar her skin. The narrow abrasion circling her neck and the pinpoint red spots in her eyes suggest strangulation as the means of death. All signs point to a homicide.”
“That’s what I thought,” the sheriff said. “Bax, you got anything to add?”