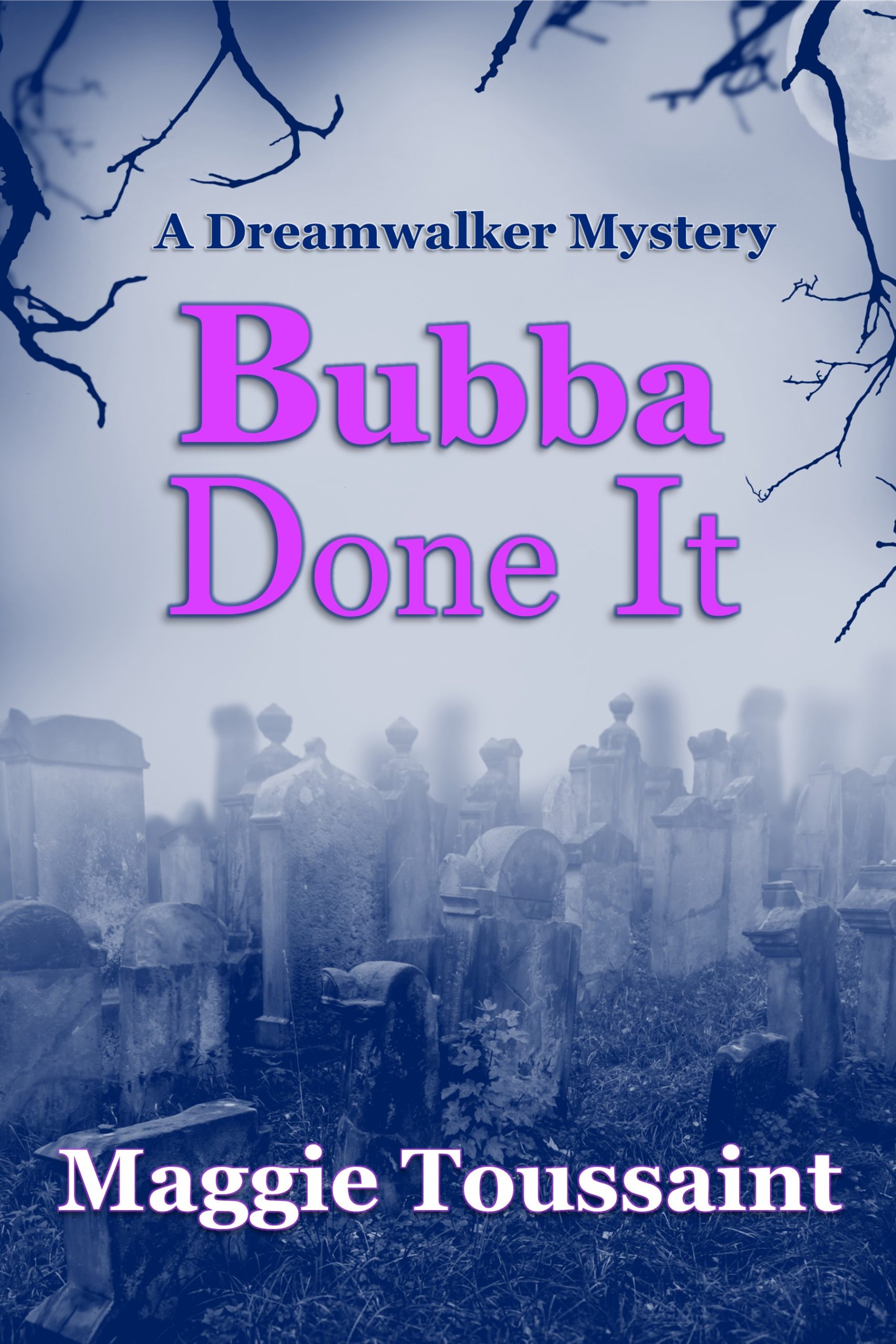 Which Bubba killed the banker?

Amateur sleuth and dreamwalker Baxley Powell is called in on a stabbing case. She arrives in time to hear the dying man whisper, “Bubba done it.” Four men named Bubba in Sinclair County, Ga., have close ties to the victim, including her goofball brother-in-law, Bubba Powell. She dreamwalks for answers, but the dead guy can’t talk to her. Baxley sleuths among the living. The suspects include a down-on-his-luck fisherman, a crackhead evangelist, a politically-connected investor, and her brother-in-law, the former sweetheart of the new widow. The more Baxley digs, the more the Bubbas start to unravel. Worse, her brother-in-law’s definitely more than friendly with the new widow. Between petsitting, landscaping, and dreamwalking, Baxley’s got her hands full solving this case.

A Georgia single mother with psychic powers races to find a killer before she’s next on the list. Since any one of the Bubbas could have killed Morgan, Baxley must use information from both her dreamwalks and her ordinary snooping to narrow down the field. Toussaint’s second Dreamwalker entry (Gone and Done It, 2014) is a walk on the paranormal side with a gritty heroine and plenty of Bubbas. – Kirkus Review

Baxley Powell, having inherited the post of county dreamwalker from her father, helps the local sheriff’s department investigate murder cases by talking to the departed spirits. In a break from her “Cleopatra Jones” series, Toussaint’s sophomore paranormal effort (after Gone and Done It) is replete with Southern charm and colorful characters. Just the ticket for folks missing Charlaine Harris’s Harper Connelly books; mysteries by Heather Blake and Bailey Cates offer similar fun reads. – Library Journal

Baxley has settled back into living in her hometown, and the humor inherent in being propositioned by former high school suitors and trying to deal with her potentially pot-selling parents keeps things light. But Baxley runs into some creepy spirits during her dreamwalking that should keep readers wanting to leave the lights on at night. Toussaint will keep you guessing right up until the end which Bubba done it, and it’s hard to put the book down when the next chapter could have anything from a funeral food-fight to the final reveal. Summary: Baxley Powell has taken over for her father as the county’s resident dreamwalker, but she doesn’t expect to ride along to a murder scene where the victim isn’t quite dead yet. The dying man says “Bubba done it,” but in a town with four Bubbas, all of whom had reason to want the victim dead, Baxley has her work cut out for her. – Romantic Times, Four and ½ stars!

Baxley Powell takes every day with the expectation of something good is about to happen. This is not her dreamwalking ability talking just the attitude that while everything may appear negative she is trying to making something positive happen for her and her daughter. But the latest case she is working one has one common denominator, too many people with the same nickname. With the victim’s last breath taken he blames it all on a man named Bubba, but when you live in a town with five of them including Baxley’s brother in law there are a lot of potential suspects and a police force that is ready to point the finger at the first one that cannot line up an alibi. Baxley knows who did not do it but even with her out of body dream walking experiences she cannot find the victim who will narrow it down to who exactly did it. She never had any issue communicating with the other side before why this case, why this victim, and where is her supposedly dead husband? The Bubbas all put up a good show and do what they can to prove they are not the murderer but all the while Baxley has this nagging feeling that something else is going on besides the obvious murder. There is something that is pulling her mind in a different direction and as she tries to figure out what is calling to her from above and below the pieces start to fit and the result is no where she wants to find herself going. Maggie Toussaint always writes a great book with enough twists and turns to always keep you guessing. – Mary Gramlich, The Reading Reviewer

When a dying banker says that someone nicknamed Bubba stabbed him, he unleashes the sheriff’s investigation into a number of townsfolk all of whom share the same moniker. What makes the lawman’s task more difficult is that each person has a viable motive. Wayne turns for help to the local Dreamwalker. But when Baxley tries to contact the dead guy in the great beyond, she runs into a dark entity that threatens to pull her into the void forever. Complicating matters are the victim’s niece who is missing and her boat that was found abandoned in the marsh. What has happened to the young girl? As Baxley gets closer to the truth, she receives threatening messages and acts of vandalism that are meant to discourage her. But she persists on pursuing justice regardless of her own peril. It’s a pleasure to see Baxley’s paranormal powers expanding. This unique element adds to the story’s mystique. With its cast of quirky characters, Southern setting, and psychic sleuth, Bubba Done It will keep you guessing until the end. —Nancy Cohen, author of Bad Hair Day Mysteries

As bank president, Morgan Gilroy, lay dying he whispers, “Bubba done it” and Baxley hears him. Immediately she thinks of her brother-in-law, but no he wouldn’t have done it. If not him them who? In Sinclair County, GA there are a few. Baxley’s dream walking skills will be tested as she seeks to find which “Bubba Done It”. This is an exceptional journey into the Paranormal. Maggie Toussaint has a flair for writing well written books with moments of humor, high suspense and guessing which “Bubba Done It” until the end. I highly recommend any book written by Ms. Toussaint. She never disappoints her readers. – Debra Knotts, Goodreads Reviewer

Gradually my surroundings took on corporeal form. The solid seat beneath me. The mechanical whir of the Jeep’s engine. The zebra-striped slices of sunlight across the lawn of Sparrow’s Point.

I was at Morgan Gilroy’s house. The banker had called for help, said he’d been stabbed. Urgency filled me, burning like acid indigestion, and propelled me out of the Jeep.

I had to see Morgan.

It couldn’t wait another minute.

I gained the porch, then the front door, which the sheriff had left open. My eyes strained to see in the dark corridor. The hallway spun. I gasped in a breath, and gravity reasserted itself.

Was the intruder still here?

I needed to find the sheriff fast.

I squinted into the gloomy corridor and took stock. Plastered walls. Wide planked wooden floors. An antique marble-topped buffet with a seashell display was to my left. A large conch shell caught my eye. I palmed it, liking the pointy edges and the smooth texture. If I stumbled upon a bad guy, I could whomp him with the seashell.

Every fine hair on my body stood on end. Energy arced from one raw ending to the next, urging me to fight or run far away. Dread mounted with each step.

I heard the sheriff’s voice down the hall. He murmured something in a reassuring tone. I followed the sound, my eyes darting from the blue and gold carpet runner to the shadowed rooms I passed. My fingers tightened around the shell.

I gained the doorway to what appeared to be a library. My gaze swept the paneled bookshelves lining two plaster walls, the carved desk and empty chair across the room, and the dark stain on the Oriental carpet. Morgan lay face up in the center of the stain. A gasp slipped from my lips.

“I told you to stay outside.” Wayne kneeled beside the banker. “I haven’t cleared the house.”

I lifted my eyes to the sheriff’s familiar rough-hewn features. Below his receding hairline were a handsome face and a trim, athletic body. If I kept looking at Wayne, I wouldn’t see the knife planted in Morgan’s chest or the bloody shirt. I edged toward a bookshelf, putting distance between me and the threshold. “I had to come.”

“This is a crime scene. You can’t be in here.” His dark gaze narrowed. “What’s that in your hand?”

He swore. “Put it down. Don’t touch anything.”

I clung to the shell and nodded toward the banker. “Is he dead?”

No wonder I couldn’t find him in the spirit world. He was still here.

The banker wasn’t a close friend, but he had a teenaged daughter. She’d be devastated at losing him, just as my daughter had been when her father was officially declared dead.

What else did I know about Morgan? Twenty years ago he’d swooped into town, flashing cash and buying property. Last year he’d sniffed after my fixer-upper. I needed money something fierce, but I wouldn’t part with my inheritance for pennies on the dollar. I’d told him where to shove his lowball offer.

Stop that, I told myself.

Morgan made a gurgling noise in his throat, rasping in a breath. This was the moment of death I hated most, the liminal moment when spirits slipped through the veil. I steeled myself for Morgan’s passing, not wanting to watch, yet unable to tear my gaze away.

I shuddered and breathed around the metallic smell.

Another inhalation from the dying man. Morgan’s chin wobbled. A raspy whisper slipped out on his final exhale. “Bubba done it.”