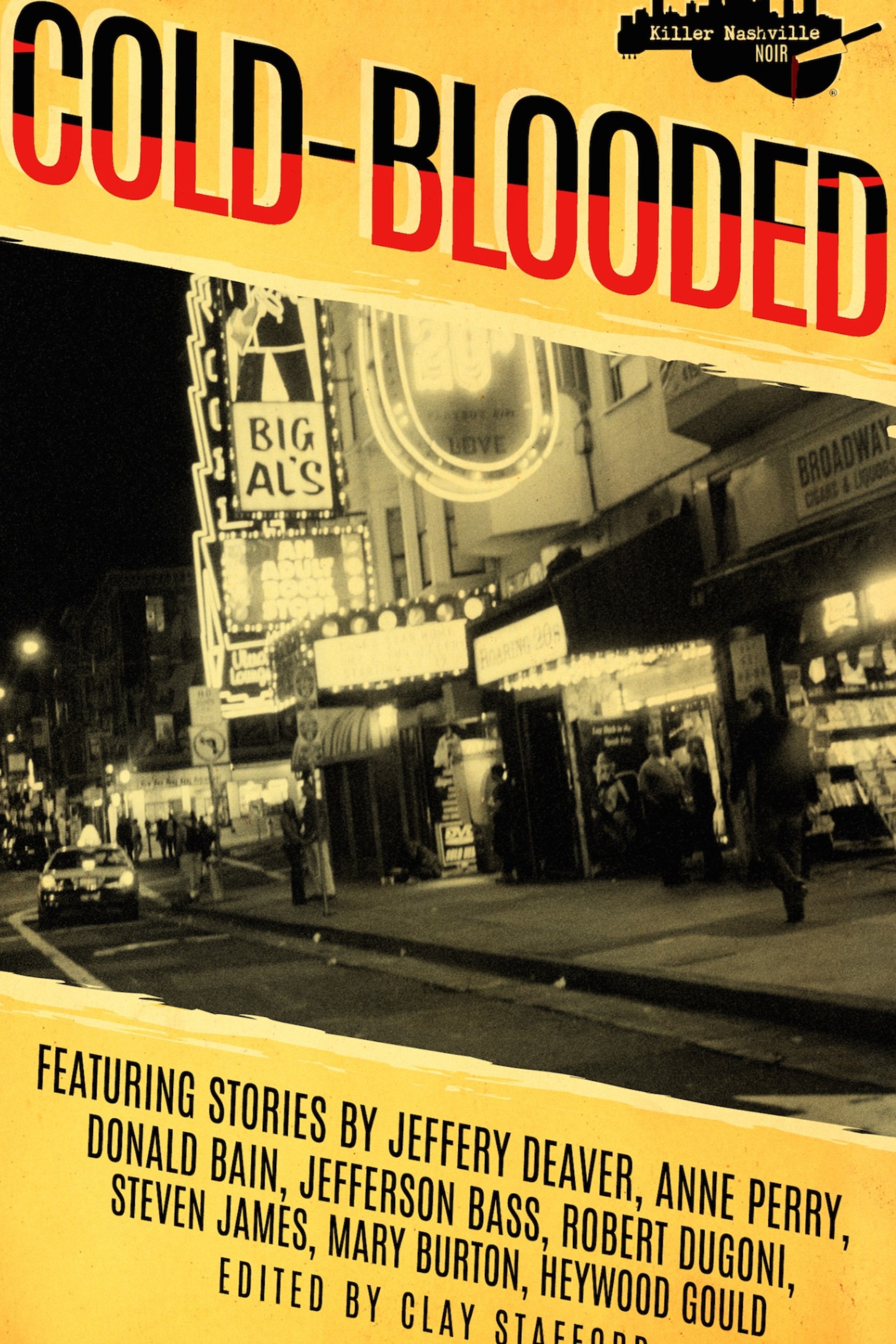 Bestselling authors Jeffery Deaver and Anne Perry join rising stars like Dana Chamblee Carpenter and Paul Gail Benson in a collection that proves Music City is a deadly place to be when your song gets called.

Every year, some of the biggest names in the thriller world converge in Tennessee for the Killer Nashville conference, an event where stars of the genre rub elbows with their most devoted fans, where the bestsellers of tomorrow pick up tricks of the trade, and where some of the best writers of today swap dark tales of good deals gone bad, rights made wrong, and murder in all shades…

This collection of new stories features some of the biggest names in suspense, from bestsellers to ferociously talented newcomers. Grouped around the classic theme of murder, KILLER NASHVILLE NOIR: COLD-BLOODED is a first-class collection and a must-have for fans of the genre.

IN PLAIN SIGHT by Jefferson Bass. Bill Brockton, forensic anthropologist, University of Tennessee, teaches students at the Body Farm. Collecting bodies for study, they are kept at the Body Farm and allowed to decompose, and then the students are assigned to gather the bones for extra credit. During one session, an extra body is discovered that shouldn’t be there. The police are called in to investigate, and we follow their clues using the knowledge of the anthropologist. The killer is easily identified from the very beginning, but it’s still a good story and interesting plot.

KISSIN’ DON’T KILL by Catriona McPherson. The husband of an elderly couple married 60 years dies at the table set by his wife. This is a cute short story of a wife getting her revenge on a cheating husband.

RIPPLE by Baron R. Birtcher. Travis, an ex L.A. cop now living in the Hawaiian Islands is visited by an old friend, Rex Blackwood, ex SEAL and now NSA. He and his Vietnam buddy, Snyder, join Blackwood searching for a young man with a manuscript that could prove disastrous to American secrets. The young man’s father was murdered for the manuscript, and unknown agents are after the boy. Travis leads the team into the jungle and run into others after the boy. After a fierce firefight, they discover the boy in a cave with the manuscript and other evidence. Blackwood takes the evidence and leaves the manuscript. Then tells his partners what it’s all about, and why he’s leaving the boy with the manuscript. A good tale. I’ve read this author’s novel, HARD LATITUDES, featuring Travis Kamahale Van de Groot, and loved it. (Reviewed under Virginia E. Johnson).

THE HUNT FOR “SKIPPY” WALKER. Willard Walker married Deborah for her beauty, but her flirtatious actions eventually led to her murder. Willard claimed that his imaginary friend, “Skippy” killed his wife, and his lawyer says he can prove it. True enough, Willard is found Not Guilty, but will Skippy let him live? RICH TALK by C. Hope Clark. Harlowe Franklin a defense attorney married to Levella O’Hara Frankin is cheating with Harlowe’s law partner, Tucker McKinley. Harlowe is trying to figure a way to keep the affair from destroying the law firm. What could go wrong? You know it will.

MAILMAN by Jonathan Stone. George Waite has been a mailman for 35 years, delivering to the same neighborhood, knows all the people, their routine, and basically their business. When mysterious Alberto Muscovito moves into the community, builds a high fence around his place, and starts receiving strange mail, the neighbors become curious. And so does George. Soon, George is tampering with Muscovito’s mail, altering it, and trying to shake the man up. But someone figures it out, and George is the first suspect, even for the murder and disappearance of Alberto Muscovito.

HIGH NOON AT DOLLAR CENTRAL by Maggie Toussaint. Several burglaries have happened in the small community, but minor business like the Dollar Central, the Art Center, and a liquor store. Baxley Powell’s reporter friend, Charlotte Armstrong, talks her into helping her solve the crimes so she can get a good story for the paper. Following the crime scenes, they quickly discover the culprit left little angels at the scene of each burglary; angels that Baxley’s grandmother had hand-made. But her grandmother has been dead for years, and the angels were given to her mother thirty years previous. Was someone trying to frame Baxley’s family, or was her mother involved? This was another neat little mystery, though the real criminal was easily spotted from the start.

REPRESSED by Jeffery Deaver. Professor Sam Fogel takes his children to a classic automobile show, and when he spots an old Buick his mind goes into a panic. Something in his past is trying to come forward once more. Some memory his mind had repressed since he was 12-years old. His wife worries about him. He sees a psychiatrist to unlock those repressed memories. Perhaps some of those memories were better left hidden.

THE COAL TORPEDO by Blake Fontenay. Master detective/spy, Allan Pinkerton visits Andrew Johnson shortly after he takes office. He wants to tell him a story about three people: Noah Baggett, Caleb Slayback, and Lucy Wright, three friends who grew up together, and did their part during the Civil War, one of them becoming a mass murderer, and requesting that the President help bring him to justice.

GIVING BLOOD by Jon Jefferson. Preston Holloman ran over George Hartley’s wife a year ago, leaving her to die on the side of the road. His rich parents got him off. But now he’s in the hands of George, who wants a life for a life. He takes him to a Blood Bank for a complete donation. Will the nurse allow it? After all, this is a rare blood he’s bringing her, and Holloman is definitely evil. What would we do?

SHUTTER SPEED by Anne Perry. It’s 18 years after WWI, and England is in turmoil, some groups believing Hitler is a man of peace, while other groups are against him. Jenny McAllister is in the group suing for peace with Germany, holding hope for Hitler. Unknown to her, Intelligence agents have infiltrated her group, and one of them is killed. She had filmed the fight in the dark, and her pictures are blank, except for a small light that she dismisses. Could it reveal the murderer in her group?

HE’LL KILL AGAIN by Heywood Gould. At O’Meara’s bar one night, a janitor from the college sees a man try to kill someone during a bar brawl, but an old man saves his life. Now the janitor feels the killer will strike again, this time killing the next victim. He tries to establish that fact with Detective McVickers, but the officer doesn’t seem to believe him. But maybe something else is going on?

LULLABIES AND LIGHTNING STORMS by Dana Chamblee Carpenter. Sybil is a Bubble girl in the town of Gideon. Her mother cares for her while researchers study her. Town folks come to ask questions, but are frightened by her revelations. A moral tale.

THE KEEPSAKE by Mary Burton. CSI Georgia Morgan, and Homicide Detective Jake Bishop meet at the lounge where Grace Duvall was murdered years ago. Joining them is Grace’s daughter, Emily, and Grace’s husband, Lance, to discuss the cold case file. But everyone already knows who the murderer is, it’s just unwrapping the clues.

PEACE, SOMETIMES by Jaden Terrell. Adrienne Cooper is the lawyer for Waylon Bayard, convicted murderer. Meeting at the psychiatrist’s office, the convict takes Adrienne hostage, leaving the guards secured in the office, taking her with him. But things aren’t exactly as they seem, and tables are turned when they reach a prepared hideout. The plot is easy to figure out, but a good one, nevertheless. I read the author’s novel, A RIVER OF GLASS, and loved it also. (Reviewed under Virginia E. Johnson).

A MATTER OF HONOR by Robert Dugoni & Paula Gail Benson. Sera Aimsley Sims is in the Civil War enactment. One member asks to meet her in a secluded place, but when she arrives someone knocks her over the head. Coming to, she finds the body of the person she was to meet. Killed by Civil War era cap-and-ball round from an antique weapon. Agent B.A. Azevedo learns that a small-time drug pusher was recently killed the same way. Are the cases connected, between high society and the drug world?

SAD LIKE A COUNTRY SONG by Eyre Price: Jimmie Dallas’s career is going nowhere unless he finds that perfect song to catapult him into stardom. When he hears young John Scott West, the Golden Boy, singing that perfect song, he thinks he’s found the solution, even if it means murder. But he doesn’t know he has to deal with the devil.

SECOND THOUGHTS by Steven James: Melissa, raped by three men while a woman watched, now wants her boyfriend to obtain vengeance for her. He does, but feels remorse with each death, until the last one. Does the woman deserve death?

THE VIRGO AFFAIR by Daco: CIA Agent Jordan Jakes is pretending to work with the Chinese on stealing a laser at NASA. They need to get to the inventor, Dr. Benjamin Johnson, who also owns a popular bar. Jordan’s Chinese contact, Jiang, is on hand to watch that she accomplishes the mission. Meanwhile, another group is after the scientist also, and things get a little spooky at the bar one night when things start happening. I would love reading the novels featuring Agent Jordan Jakes.

SAVAGE GULF by Clay Stafford: A complicated love triangle. Supposedly Jack and Heather are planning on murdering Jack’s wife, Marjorie, for her money. Heather’s husband had died leaving her his money. Jack and his partner set up the plan. He’s Jack’s alibi, while Jack and Heather murder Marjorie. But someone else has made other plans.

These short stories were a lot of fun, each different, well thought out, and the best-edited anthology I’ve read in awhile. I love short stories, and these were just right. Highly recommended for mystery lovers. — Amazon Reviewer Virginia E Johnson