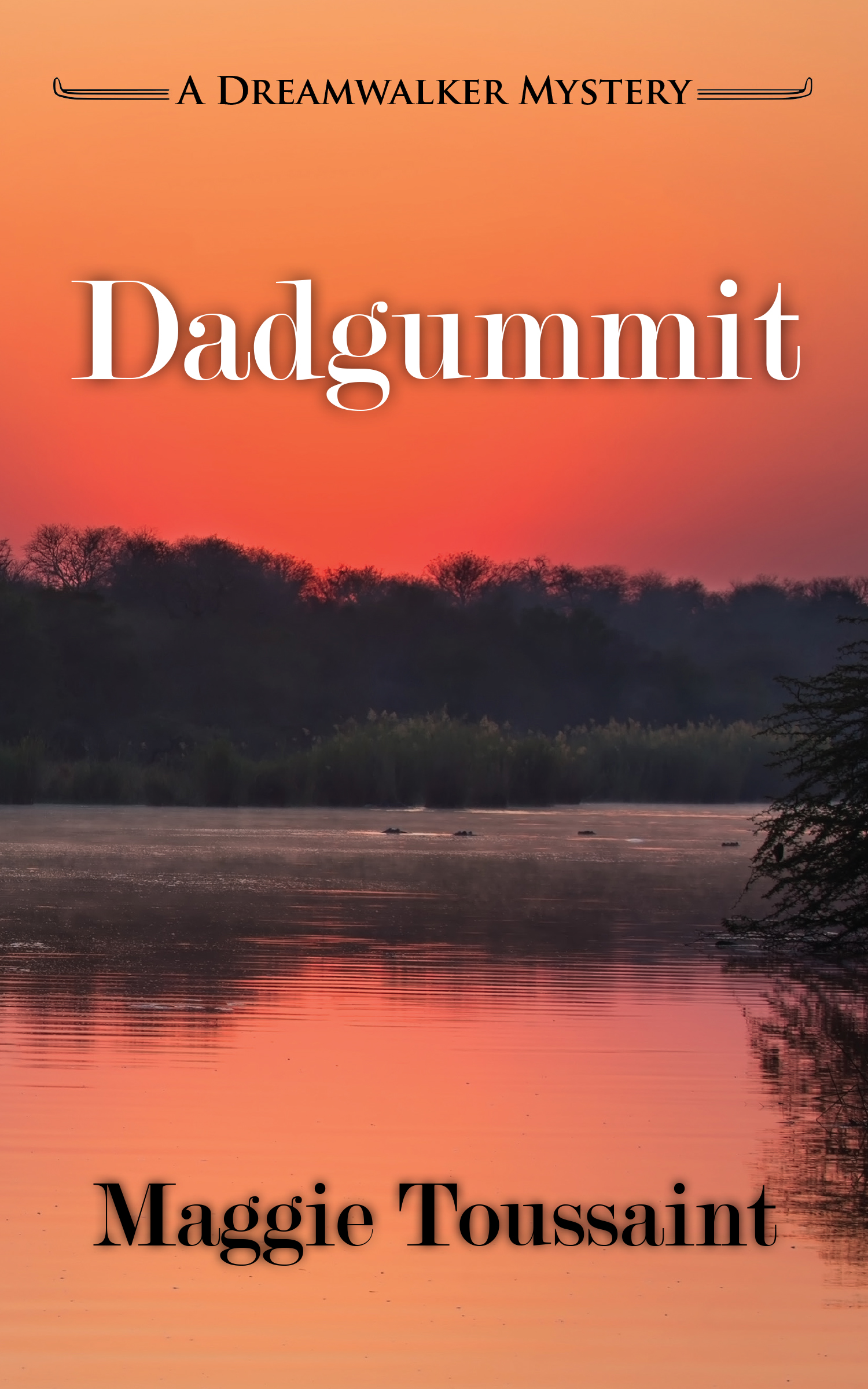 Amateur sleuth Baxley Powell is on vacation at Stony Creek Lake in the north Georgia mountains. Her parents, best friend, and ten-year-old daughter are camping with her. Almost immediately, a young man’s body is found beside the lake. Strangely, there’s no apparent cause of death. The local police have heard about Baxley’s skill at closing unusual cases, and at their urging she agrees to help.

Her psychic sleuthing leads the police to a halfway house. There they encounter eight comatose victims and an odd man named Jonas, who also has supernatural abilities. Baxley senses Jonas cruelly drained their life force energy. Jonas escapes, taking the sheriff as a hostage. Deputy Sam Mayes, a Native American, leads the manhunt, and he keeps Baxley close, knowing she’s the key to capturing this powerful criminal.

Baxley’s paranormal talent of dreamwalking, which she uses to traverse the veil of life, draws the unwanted attention of beings believed to be Cherokee folklore. Jonas stole a treasured artifact from them, and they want it back. They hold Baxley’s best friend and two others because they know Baxley can help them. As the clock ticks, Jonas taunts this crime-fighting duo and proves to be a wily adversary.

With the body count rising, Baxley and Mayes realize they are up against an entity who appears to be invincible. Do they have the power to subdue an energy vampire, turn the tide of evil, and save the day?

FIVE STARS. MYSTERY: Baxley Powell is just looking to spend a week with family and friends (and a few pets) camping in the mountains of North Georgia. However, the police have a different idea of how she should spend her time. Baxley has particular talents which can help the police solve the murders of several people, and they’re not going to let a little thing like the remote location get in their way. Before she knows it Baxley is reluctantly using her talents to assist in several investigations all at once.

What a great story! Ms. Toussaint has created vivid and believable characters in a paranormal setting that draws the reader into the action. The arc of the story is well thought out and the author avoids tired clichés in her treatment of all the characters. Baxley narrates the action with wit and humor as she finds herself manipulated by both human and supernatural creatures alike. The author draws from myth and legend and her boundless imagination to create a wonderful story. “Dadgummit” keeps the reader engrossed throughout each page with surprising plot twists and the author’s unique take on the paranormal genre.

Highly recommended for both fans of paranormal and for those readers who just like a great story! Gwenellen Tarbet for InD’tale Magazine

Dadgummit is a stunning entry in the Dreamwalker Mystery Series by Maggie Toussaint, a mystery that explores murder and the unusual investigative skills of amateur sleuth, Baxley Powell. At Stony Creek Lake in the north Georgia Mountains, Baxley and her parents, her best friend, and her teenage daughter are camping — something she’d wanted to do for ages but was held back by work — when a young man’s body is discovered by the lake. No one knows the cause of death.

Now, Baxley has to use her special skills to discover the cause of death, a journey that leads to more sinister discoveries and to Jonas, the vile killer who could be draining the life force from the victims. Things get even more complicated when the Cherokee kidnap Baxley’s best friend and two others, forcing her to retrieve a treasure stolen from them by Jonas before the release of her loved ones. Working with Deputy Sam Mayes and with many lives at stake, can Baxley help to catch a criminal who seems so powerful and cunning?

Maggie Toussaint has a great gift for prose and plot. From the very first page, I was drawn in by the powerful prose, the tight sentences, the images, and the way she blends the consciousness of the characters with plot and setting. The characters are unique and original, and their extraordinary gifts make them even more interesting. I loved Baxley and her dreamwalking gift and how this gift plays a central role in her investigation. The plot is tight, well developed, and well paced to keep the reader turning the pages. Dadgummit is a rare story that will have readers completely engrossed in the plot and in the characters. —Reviewed by Ruffina Oserio for Readers’ Favorite, 5 stars

I love this series. Once again, Baxley is called upon to use her abilities to solve a complex case which took this reader on a mystifying ride that was hard to put down. The mystery was well-developed giving me a chance to escape into the world of dreamwalking, little people and the cosmic universe. The narrative was visually descriptive that grabbed me immediately and I felt like I was there with Baxley as she tackled the mysteries of the untried. I like how this story was staged where it was more about finding a way to stop the demon and the steps and collaborative efforts of the newcomer and an unlikely ally to apprehend this vicious entity which was done with great aplomb. The main characters all played pivotal roles that added to my reading enjoyment and I especially enjoyed the scenes with Charlotte and the deputy. Boasting a wonderful cast of characters, engaging dialogue and a supernatural atmosphere, this is one of the best books in the terrific series and I look forward to more adventures with Baxley and her friends. — Dru’s Book Musings

Suddenly the air felt wrong in this tranquil setting, as if it was too heavy to draw into my lungs. These cops were searching for a suspect. Not my problem. Except I had a sinking feeling it would become my problem.

All three dogs howled at the siren, and Larissa, bless her, tried to quiet them.

Loggins scowled and stepped off the boat toward Charlotte, tablet tucked under his arm. He was taller than me and looked former-professional-athlete solid.
I felt a tug on my elbow and jumped.

Deputy Duncan gestured toward the path leading back to our camp. “Come with me, ma’am. We have cruisers meeting us at your campsite for transport.”

My feet grew roots. The fishing rod bobbled in my hands. “I’m not leaving my daughter or my friend. We’re traveling together. If you need someone to vouch for my character, call Sheriff Wayne Thompson down in Marion.”

“You’re in our database as his consultant, and we’ve already got a call in to him. This is a routine precaution. For your safety as well as ours—”

“Gun,” Deputy Loggins yelled from behind me. “She’s got a handgun in her waistband.”

“But I can explain.”

A millisecond later, my Beretta was gone, my pockets emptied, and my arms were tightly clenched behind me. In the second before I totally locked down my extra senses, I got an inkling of the cop’s mental state. Neutralize the threat. Protect my partner. Assess the danger level. Contain the situation.

Fear threaded through his laser-focused thoughts, along with excitement. I needed to do some fast talking before the situation escalated further. “I can explain the gun,” I began again, twisting around to search Deputy Duncan’s face. “Sayer’s visit last night spooked me. I didn’t want to be unarmed if he strolled by today. I have a carry permit.”

Maddy charged the deputy, barking like she’d cornered an armadillo in the yard. In slow motion, flecks of dog spittle flew everywhere—on me, on the deputy. The man behind me shifted his weight onto the balls of his feet. Was he reaching for his gun again?

“No!” I yelled at the deputy, who had drawn his weapon. “Don’t shoot!”