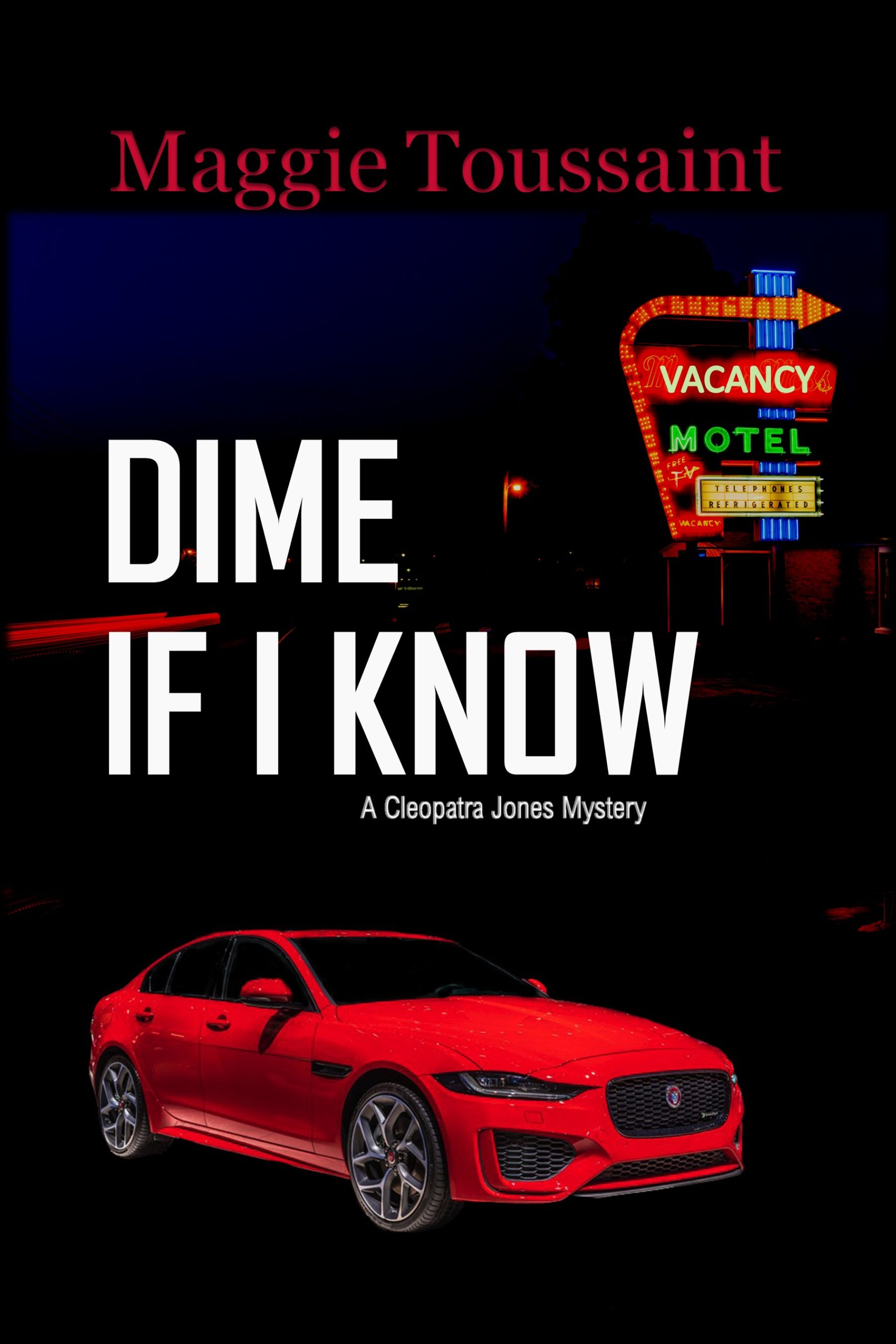 Cleopatra Jones has visions of marriage dancing through her head, but her boyfriend, sexy golf pro Rafe Golden, is happy with the status quo. With three puppies, a Saint Bernard, two teenaged daughters, a free-spirited live-in mother, a kooky best friend, and an accounting firm to run, Cleo’s household is hopping. But still. After months of dating Rafe, her relationship should be headed somewhere.

Mama comes home engaged and the wedding is in three weeks. Cleo’s happy for her mom, and hopes Rafe takes the hint. Meanwhile, her best friend is running for mayor.

A former girlfriend of Rafe’s turns up dead in a seedy motel. His fancy red sports car was spotted there the night she died. Cleo questions him, but he swears he didn’t shoot her.

The police identify Rafe as their top suspect, but Cleo’s having none of that. She hires him a lawyer, gets crossways with his snooty family, and sets out to prove her boyfriend’s innocence.

The more she digs, the more questions arise. Rafe’s been keeping secrets from her, but are they deadly secrets?

Dime If I Know is set amid the rolling hills of contemporary mid-Maryland. It features fast-paced family life and Southern humor. Cleo’s trials and tribulations with the game of golf are a counterpoint for her success in following the money and identifying the real killer.

Other books in this series:

“Accountant Cleopatra Jones shifts into overdrive when her boyfriend is accused of murder. Toussaint makes her third entry into the sassy-working-girl-with-messed-up-love-life-solves-mysteries race…” —Kirkus Reviews

“Death Island Style is an absorbing fast-paced mystery novel that readers will not be able to put down” — Jacqueline Seewald, award winning author

“Maggie Toussaint scores a hole in one with this romantic mystery that combines suspense, love, and multiple puzzles. Add in a few Saint Bernard puppies, and what could go wrong?” —Tracey Weber, author of Downward Dog Mysteries

My fingers gripped the steering wheel when Rafe’s voicemail clicked on again. “This is Cleo.” I grimaced at the razor-sharp edge to my voice. With Rafe sneaking off last night to do God knows what, I wondered how many women left him messages. I didn’t want to be mistaken for another woman.

I cleared my throat, trying not to sound as desperate as I felt. “I called to invite you to dinner tonight. I have news to share, news I need to tell you in person. Call me.”

With that I hung up. I’d phoned him at bedtime last night, before early church this morning, and now, at midday. All the calls had gone to voicemail. Where was he? Normally he worked at the golf course on Sunday. I’d checked the club, and his Jaguar wasn’t there.

Had I crossed a line? Was I turning into a psycho girlfriend who had to know where my boyfriend was every minute of the day? Now, now, I told myself. This was genuine concern. It wasn’t like Rafe to be out of touch for so long.

I had to face facts. He was an adult. He hadn’t been missing twenty-four hours. I should put his whereabouts out of my mind and start on my other projects for today.

I exited my sedan and entered the Tavern, the Hogan’s Glen watering hole where Jonette worked. Her boyfriend, Dean, owned the seventies-style bar. Both greeted me warmly. Jackson Browne crooned a song about pretending, and I took my cue from the singer. I could pretend everything was all right.

“Are we plotting world domination today?” I slid into the booth across from Jonette, who looked young and hip in a bright-pink blouse and black slacks.

She thumbed through a sheaf of papers. “I wish.”

Dean brought me a glass of water and pulled up a chair. Today his long hair was clubbed back in a ponytail. In his black T-shirt, jeans, and boots he resembled an aging rock star.

I smiled my thanks at him and nodded at Jonette’s stack. “What’s all that?”

“Crapola from the Internet. Whose bright idea was it to fish for issues? I’ve got more issues here than I care to know about. Each voter wants their pet project guaranteed, and then they’ll vote for me. No way I can please everybody.”

“Right,” I said. “Trying to please everyone is a recipe for disaster.” I stopped to clear my throat. “And, fishing for issues was your idea. You wanted to know what ‘the people’ thought.”

Dean’s head came up, and relief shone in his eyes.

“The people are crazy,” Jonette said. “Here’s one asking the city to buy Crandall House and turn it into a museum and interpretive center. Where would I get the money to do that from the city budget? Maybe if I stopped trash pickup for ten years or so I could swing it, but everyone would be unhappy about rotten garbage in the street.”

Crandall House had been built two centuries ago by our town’s founding father. Now the family descendants lived elsewhere, and they wanted a small fortune for the house.

“Yeah. Big-ticket items like that need to go on the back burner,” I agreed. “You need to take on a few lesser causes that mean something to you. Read me the topics from the other emails.”

“A guy wants me to drill more wells because we’ll run out of water if any of the White Rock houses ever get bought. Here’s a guy wanting me to legalize medical marijuana.”

“That one gets my vote,” Dean said.

“Here’s one from that grumpy lady over on Third Street,” Jonette continued. “She wants speed bumps installed on her street because folks drive too fast past her place. And here’s someone asking if we can’t get three weekdays of trash service for the price of two.” Jonette thumbed through a few more pages, and her face lit up. “Yes! Found it! This is the issue for me. We need to establish a dog park in the city. I need a place for my puppy to play.”

“A dog park would be nice,” I agreed. “Pet owners should have a place where pets can romp off the leash.”

“I can’t imagine anyone getting upset over a new dog park,” Dean said.

“Looks like I’ve got my first agenda item,” Jonette concluded.

“We’re coming along. Tell me about the event next week. You’re holding it here at the bar?”

“Yep. Figure most folks know we’re dating, and they know where the bar is; might as well take advantage of that to get them here.”

“Select a menu of food we need to serve. Something classy but cheap.”

“Nope.” I waited, drawing the suspense out. I wasn’t Delilah’s daughter for nothing.

Charlie was my ex. He’d recently moved next door so that he could spend more time with our girls. So he said. “That doesn’t count. He proposes every time he sees me. That’s not news, and you know it.”

I nodded. “Yep. Bud proposed. She accepted. They’re getting married in three weeks.”

Jonette’s eyes met mine. “Wait a minute. How long have you known about this?”

“Less than twenty-four hours, but Muriel and Francine knew first,” I said to soften the blow. “They’re organizing the food for her reception. Say, that gives me an idea. I wonder if they’d do the food at your fundraiser. It could be a trial run for their new catering business.”

“We don’t have much money,” Jonette cautioned. She chewed her lip a moment. “Maybe my campaign committee could chip in to finance the snacks. Then we could spend the rest of the campaign going door to door to beat that rat-fink Darnell.”

“I’m good for twenty bucks,” I said. “And maybe Francine and Muriel would do it at cost if they could hand out brochures for Two Sisters Catering.”

“Yeah, yeah. I’m okay with them networking at my party. Let’s see. If you, me, Dean, and Rafe chip in twenty each, that’d give us eighty. Would Charlie cough up twenty for the fundraiser food?”

“Charlie would do it. He’d think that would earn him a spot in my good graces. But, Rafe…”
Jonette grabbed my hand. “What? What aren’t you telling me about the golf pro?”

I pulled away from her, hugging my middle. “It’s probably nothing.”

“You’re not acting like it’s nothing. What did he do?”

“I don’t have any idea what’s up, but my imagination is running wild. He got a call yesterday morning during my lesson and cancelled our date last night. I can’t find him anywhere today.” My lip trembled. “He’s not returning my calls.”

“What?” Jonette zeroed in on her boyfriend. “You know something.”

“You should,” Jonette insisted.

“Yes, please,” I urged. “Any information is better than nothing. I don’t know if he’s hurt or dead or just a jerk.”

“There aren’t too many red Jags in the county. I recognized his car at first glance.”

Jonette smacked her open palm on the tabletop. “This is worse than trying to get information out of Cleo’s mom. Where was he parked?”

Linda Ronstadt belted out a song about being cheated and mistreated. My heart raced as I waited for Dean to spit it out. It had to be another woman. Nothing else would make Dean so hesitant, right?