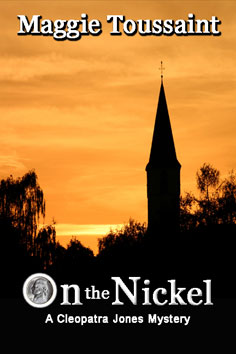 Mama’s strange behavior jolts accountant Cleopatra Jones from her whirl of late summer activities with her daughters, pregnant Saint Bernard, and new boyfriend. When Cleo overhears the heated argument between Mama and her church-lady rival, Erica Hodges, she realizes Mama is out of control. The police report Erica files about Mama’s threats add to Cleo’s growing unease.

Two days later, Erica is dead, the victim of a hit and run. Though Erica’s reputation of arrogance, bossiness, and rudeness is well-deserved, she descended from the town’s founder. The mayor pressures the police to obtain justice for the town’s leading citizen.

To Cleo’s horror, there’s a person-sized dent in Mama’s gray Olds. Mama denies killing Erica but refuses to account for her whereabouts that night. Mama’s secrets are maddening, but are they deadly?

“What a complete an utter delight this book is. Cleo is a wonderful character and all the people in her life just add icing to the cake to make the book a great read. I thoroughly enjoyed every minute of this book and can’t wait for the next one in the series.” –Mary Gramlich, THE READING REVIEWER

“The second in this amusing and romantic series (In for a Penny, 2008) is a welcome addition to the cozy ranks.” –KIRKUS REVIEWS

“On the Nickel is the second in the Cleopatra Jones Mysteries. The first is In for a Penny, which will entertain you as much as the second. Maggie Toussaint should know how to write “Southern;” she is Southern to the core. I recommend both novels.” –Celia Yeary, author of TEXAS BLUE

“On the Nickel is a fast-reading mystery, replete with agreeable characters and a picturesque setting.” –MYSTERIOUS REVIEWS

Numbers flowed in satisfying streams through my ink pen onto the Sudoku puzzle. A nine here. A two there. I scribbled a possibility in the corner of a grid square and sipped my coffee. Patterns emerged. I inked a seven in the top row, leading to three other filled-in numbers.

Without warning, Mama upended her oversized purse on the kitchen table. Junk clattered. Loose coins clinked. A tube of mulberry-colored lipstick rolled on top of my folded newspaper. Alarmed, I studied her as she pawed through the mound of personal items. A can of hair spray tottered on the edge of the table, and I caught it a moment before it fell.

“Lose something?” I asked, placing the can squarely on the table.

Mama muttered out of the side of her mouth. “My car keys.”

Her color seemed a bit off. I set aside my puzzle to help sort through the jumble. I lifted the umbrella and plastic rain bonnet and moved them to the side. Her wallet was large enough to give birth. No keys hiding under it. I checked beneath her new hairbrush, a tube of toothpaste, and a pack of breath mints. Nothing under the mini-photo album, tissue packet, or her dog-eared credit card bill.

“If I knew that, I wouldn’t be looking for them,” Mama huffed.

Was something else wrong? I chewed my lip and replayed the morning in my head. Mama ate a good breakfast. Her buttercup yellow pant suit appeared neat and tidy as did her mop of white curls. Her triple strands of pearls were securely clasped around her neck. So, her appetite and grooming were fine, but her behavior was off. Probably not a medical emergency.

There was just enough vinegar in her voice to make me think I’d missed something big. Like maybe a luncheon date with her. Or broken a promise. But I hadn’t done those things. I pulled out a chair and invited her to sit down. “Tell me what’s on your mind, Mama.”

“The price of gas keeps rising.” Mama sat and enumerated points on her fingers. “World peace is a myth. Social Security isn’t social or secure. And Joe Sampson had no business dying on me.”

She’d run out of fingers, but I got the message. Guilt smacked me dead between the eyes. I had forgotten something. The anniversary of daddy’s aneurism. Usually we took a trip to the cemetery on August 21. I gulped. “Oh, Mama, I’m so sorry. Why didn’t you say something yesterday?”

“I didn’t want to make a big deal of it.” Mama’s voice quivered. “It’s been three years, Cleo. I should be able to go by myself.”

I reached over the kitchen table and covered her hands with mine. “You don’t have to do that. I’ll drive you to your meeting, then we’ll swing by Fairhope on the way home.”

Mama sat up soldier straight. “That will eat up your whole morning.”

“No problem. We mailed all the quarterly tax payment vouchers to our Sampson Accounting clients last week. I can’t think of anything at work that won’t keep until this afternoon.”

Half an hour later, I was sitting in the hall at Trinity Episcopal while Mama attended her Ladies Outreach Committee meeting. I’d brought a magazine to read, but there was something else about Mama this morning that worried me. Something more than our delayed cemetery visit. I wished I knew what it was. Even though I’m good at puzzles, I couldn’t put my finger on what was wrong. Knowing Mama, I wouldn’t have long to wait. I dug my magazine out of my purse and flipped through the glossy pages.

In a little while, the gentle murmur of conversation from the meeting room rose to an angry buzz. Mama’s sharp voice sliced through the fray. “Mark my words. If you don’t change your ways, Erica, someone will change them for you.”

My heart stutter-stepped at the heat in her voice. This was not good. How should I handle it? Mama would not appreciate me trying to straighten this out. My intervention would be the equivalent of waving a red flag in front of a penned bull. I hesitated, hoping that the women resolved their difference of opinion on their own.

“You threatening me, Dee?” Erica’s nasty tone ruffled the hair on the back of my neck and spurred me into defense of my mother.

I stashed the magazine in my shoulder bag and hurried down the pine-scented corridor, the soles of my loafers smacking against the hard tile. After years of insulting each other, would the hostility between Mama and her arch nemesis turn physical?

I entered the back of the meeting room in time to see Mama stride up to Erica’s podium. Ten seniors sat transfixed by the live drama. I had a very bad feeling about this. As emotional as Mama was today, her patience wouldn’t last for long. And Erica seemed to be spoiling for a fight. That wasn’t going to happen on my watch. I hurried forward, edging past the U-shaped log jam of tables and chairs. My eyes watered at the thick cloud of sweet perfume.

Mama planted her hands on her hips. “I’m saying what nobody else has the guts to say. You are despicable. That outreach activity was supposed to bring joy and laughter to those dying children. You crushed their hopes. Worse, you gave them false hope. They were crying, Erica. You caused those dying children to suffer more.”

Looks could be deceiving.

Mama huffed out a great breath. “This one could have been avoided. Francine was doing a good job with scheduling before you horned in and messed it all up.”

Across the room, Francine gasped at the mention of her name. She slid down in her seat, covered her face, and ducked her white-haired head.

Erica surveyed the room, staring down the other matrons, before turning back to Mama. Her back arched, and her thin nose came up. “You think you could have done better?”

“I know so. All that hard work the committee put in. You wasted it. You hurt those kids. Those circus tickets were nonrefundable. You threw away money we worked hard to raise.”

“Don’t worry about it.” Erica barked out a sharp laugh. “We’ll find more needy kids to show our civic merit. The hospital has a never ending supply.”

A collective gasp flashed through the room. My stride faltered as distaste soured in my stomach. I couldn’t believe what I was hearing. A glance at Mama’s flame-red face and I knew Mount Delilah was about to erupt. I hurried forward.

“That does it. I demand your resignation as chair of the Ladies Outreach Committee!” Mama shouted.
“You’re out of order, Delilah Sampson,” Erica shrilled. “Sit down and shut up.”

Mama’s mouth worked a few times with no sound emerging. She clutched her heart. I stepped up and planted my hand on her shoulder. “Mama?”

She glared at Erica. “You can’t talk to me that way.”

“Think again.” Erica smacked her open palm on the podium. “This is my meeting, my committee, my church, my town. I can talk to you any way I want.”

Mama turned to face her friends. “Say something.”

Brittle silence ensued. Not a single eyelash fluttered on the downturned gazes. Disbelief flashed through me. These women were Mama’s friends. Her best friends, but they were all intimidated by this big fish in our tiny pond. Poor Mama. We needed to get out of here before both of us did something we’d regret.
I tapped Mama’s shoulder again. “I’m sorry to interrupt, but I have a family situation and have to leave. Please come with me now.”

Mama nodded to me and inhaled shakily. She narrowed her eyes at Erica. “This isn’t over.”