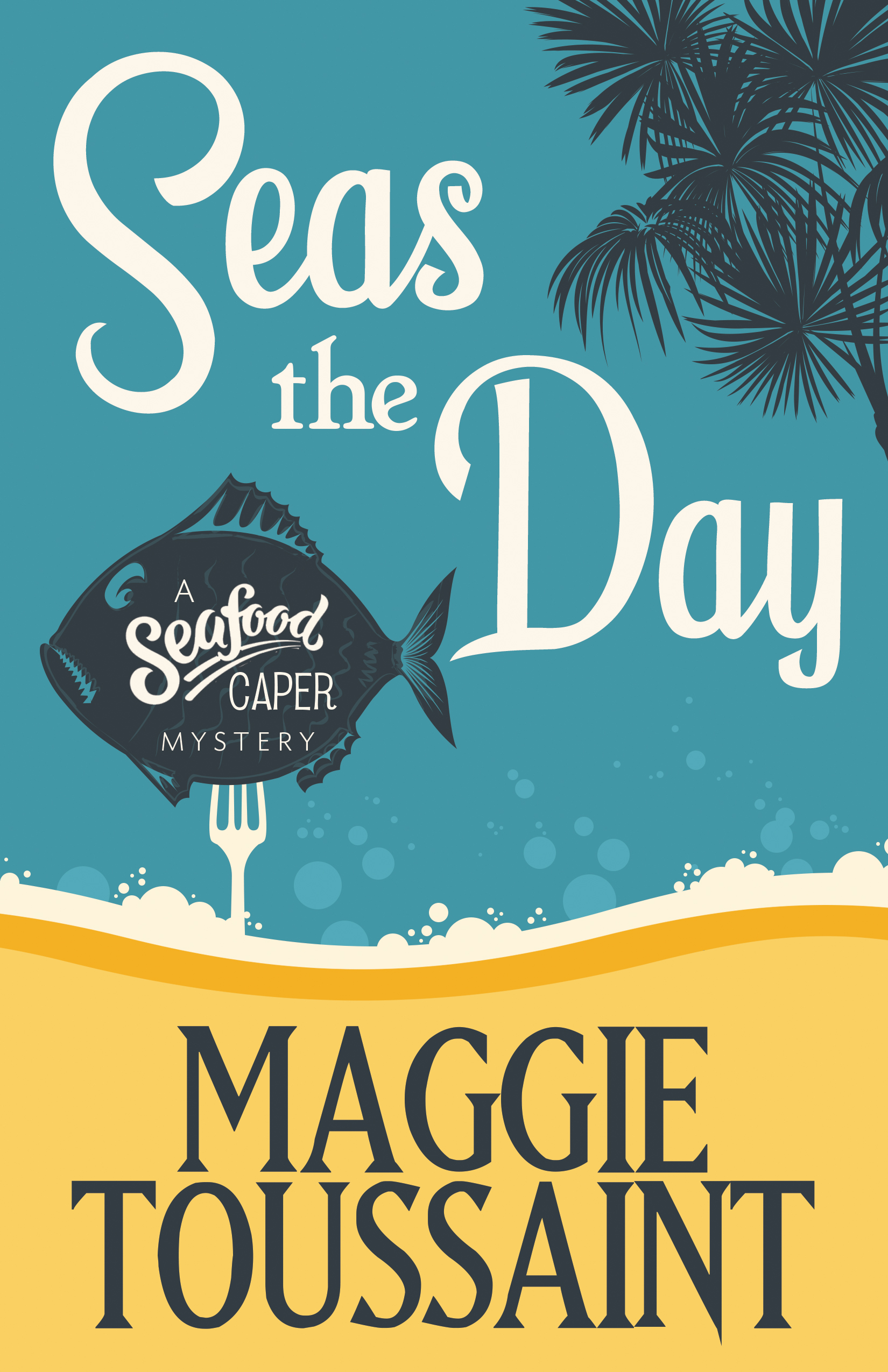 Caterer River Holloway has talents beyond her to-die-for cooking. She is also known among friends and family on Shell Island as a “finder” of things. Which is why a desperate mother begs River to track down her grown son, Chili Bolz, who’s seemingly vanished.

Deputy Lance Hamlyn, a newcomer to Shell Island, has hit a dead-end in trying to locate the missing man. Familiar with River’s reputation, he attempts to team up with her, hoping that her inside track with the locals might aid his investigation. But the simple missing person case begins to boil over into something far more frightening when Chili’s mother falls victim to a brutal assault. Worse, her dying words to River seem to incriminate more than one of River’s friends in both kidnapping and, now, murder.

While Deputy Hamlyn conducts the formal criminal investigation, River uses her time between catering events to do some sleuthing of her own. Her efforts are hampered by the unexpected return of her absentee boyfriend, who has his own reasons for wanting her to stay safely in the kitchen. With the number of suspects growing longer than her food shopping list, River soon finds herself caught in an unsavory recipe for disaster. She must locate the missing Chili and discover who killed his mother before her own goose is quite literally cooked!

Maggie Toussaint serves up a fun and captivating read in Seas the Day, the first in her Seafood Caper Mystery series! Complete with Southern recipes.

“A missing friend, mob connections, and murder mix together in this suspenseful tale. Another winner by Maggie Toussaint!”—Nancy J. Cohen, author of the Bad Hair Day Mysteries

When Estelle Bolz asks River to find her missing son, River does her best. Estelle’s sons have been like brothers to River, but there’s a lot more to this story than meets the eye. The more River finds out, the more trouble she unleashes not only on the Bolz family, but on herself.

Secret identities, people who aren’t what they seem, and a plucky caterer who wants to see the best in everyone, Maggie Toussaint scripts a cozy mystery that showcases the unique landscape and sense of community found in coastal Georgia and its barrier islands. Stick around to the end, where readers are treated with some of River’s signature recipes! The first in Maggie’s new Seafood Capers series, cozy fans will look forward to River’s subsequent adventures.—Karla Brandenburg, author of mystery and romance

Loved this story! It was the first in the series but felt like it was in the middle, in a good way. You know there is backstory but you don’t get bogged down in it. Really fun read and I was sad when it ended.—Kristin on Goodreads

I enjoyed this first entry in a new series. There is a definite backstory concerning River’s relationships and hopefully it will be explored in future books. I look forward to more mystery and mayhem on Shell Island!—Pat Dupuy on Goodreads

Kale and Chili Bolz are close to their mother Estelle. But when Kale is lost at sea and Chili winds up missing, Estelle pleads with caterer River Holloway to find Chili. Busy with her catering business and worried about her boyfriend in California, River doesn’t really have time to investigate, but when she finds Estelle badly beaten, she pursues the case. Lots of twists and turns and secrets to uncover.—Christine on Goodreads

“My Chili’s gone,” Estelle Bolz sobbed in my ear. “You gotta help me, River. You can find anything. Please, please find my son.”

Gone?” Oh, no. I needed his fresh fish for tonight’s Holloway Catering client. Still holding the phone, I stepped away from the pie crust bowl, moved to the kitchen window, half-expecting to see Chili sauntering across my lawn. “I don’t understand. He left town?”

“You tell me. His keys are on the hutch. His truck was parked at the house until the cops took it. His boat’s in the slip. He hasn’t called me since Tuesday morning. I can’t lose another son.”

My heart went out to this woman who’d been through so much. Her youngest son perished at sea last year. Having another missing son was my late mother’s bridge partner’s worst nightmare.

I switched the phone to speaker and reached for pen and paper. “When did you last see him?”

“Did you notify the cops?”

“I did. A deputy is looking for Chili, but he’s made no progress all week. I rode over to the Law Enforcement Center for three days in a row. They say there’s no sign of foul play and he’s an adult. Meanwhile, Chili hasn’t called in three nights. This is not right.”

Today was Friday. “I ordered sea bass from Chili on Tuesday morning, right after I booked a catering job. Nobody’s heard from him since Tuesday?”

“Nope. He wouldn’t take off like this and leave me to worry about where he is. That’s why he calls every night. I’m tied up in knots.” She sniffed loudly into the phone. “You’ve always been like a daughter to me, and I know this is a lot to ask. Please help me find Chili.”

I felt uneasy being asked to find a missing person. That was much different from finding misplaced keys or a lost dog, but Chili was my friend. He must be in trouble if he wasn’t calling his mom. Estelle’s rapid breaths filled my ear like a huffing freight train. “I’ll help you. First, sit down and breathe deeply. We’ll sort this out together.”

“Thank you,” Estelle said. “I just didn’t know where else to turn.”

“That’s it. Deep full breaths. In and out.” My breathing calmed too. I started with the easy questions: “Have you tried his friends? Did he find a new girlfriend after he and Trina broke up?”

“After his brother died at sea, Chili kept to himself. That no-account Trina lasted six minutes past Kale’s funeral. Chili’s all I got left in the world. When I consider possibilities of why he’s missing, my gut aches so bad I can’t stand up straight. Something’s horribly wrong. I’m terrified he’s hurt or worse, and I need to do something. We need to do something.”

I felt for her, I truly did. Mr. Bolz died of a heart attack long before the family moved here. Estelle supported her family with a dry cleaning business, with only her sons and friends for companionship. My mother died last year, a few months after Kale was lost at sea. It was hard enough to lose one relative, but to lose two so close together would be devastating.

Estelle needed an advocate. Without her boys, she was all alone. Mom’s friend needed an insider who knew her son. However, there must be a reason the cops weren’t getting anywhere.

“Chili needs your help,” Estelle continued while I mulled things over. “I’m begging you. Find my son.”

I stated the obvious. “If he left Shell Island, I don’t have the resources to find him. The cops do. Convince them to expand their search. I’ll go with you to the station if you like.”

“Don’t get me started on the po-lice. The sheriff has his eye on reelection and that new deputy thinks I’m an alarmist. It’s so frustrating.”

Estelle paused for so long I thought she must be crying, then she began again. “Your mother, bless her heart, used to brag on you all the time, especially how good you were at solving puzzles. I trust you, River, not the people who hand out speeding tickets. Those outsiders don’t know my family. They don’t understand why Chili wouldn’t leave. Not on purpose. We rely on each other. I-I-I can’t make it without him. Please, River.”

I’d known the Bolz family most of my life. Chili was two school grades ahead of me, Kale a school grade behind. Like my family, they worked several jobs to make ends meet because money was scarce here.

“I’m flattered by your faith in me, but I’m not a detective. I don’t have a network of professional investigators like the sheriff does. If I ask around, will you keep the pressure on the cops? They can put out a notice that he’s missing and it will go all over the state. Did you think about going to the newspaper, radio, or TV with your story?”

“Heavens, no,” Estelle shrilled. “Chili doesn’t want everybody and his brother spying on him. He’s a private person. First, I thought he must’ve fallen off the wagon and gotten tangled up with Mr. Jim Beam again.” She sighed. “I looked, and there’s not a drop of booze in his place or in his trash. He isn’t on a bender. I want somebody I trust on the case. I’ll pay you too.”

“I won’t take your money. I’m hesitating because if he’s in dire straits, you need more than me helping you.”

“Tell you what, I’ll keep the pressure on Sheriff Vargas, if you’ll question the younger crowd,” Estelle countered. “They’re more likely to talk to you than a stranger anyway.”

I was relieved she sounded calmer. “I am very concerned about Chili and wish I could drop everything and start searching right now. But my livelihood depends on successful catering events. Tonight I’m booked for the Robertson’s anniversary dinner. I’ll be busy all afternoon prepping the meal. They eat at seven and it will be after nine before I get home.”

“Do what you have to do and ask everyone about Chili. We have to find him.”

“I’ll do my best. If I learn anything, I’ll call you. When you spoke to him on Tuesday, what did he say?”

“He cancelled on our regular lunch at the Sunset Buffet. It’s unlike him to miss the meatloaf special. That boy loves his meatloaf. If I’d’a known that when I had him, I’d’ve named him Meatloaf.”

“Did he say why he cancelled?”

“Nope. Said something came up. I didn’t actually speak to him. He left me a message.”

“Did you play it for the cops?”

“Deputy Hamlyn said it wasn’t helpful. I’m out of my mind worrying about Chili. You’ll find him, won’t ya?”

Estelle ended the call. I glanced at my notepad. At the top of the page I’d written “no fish.” I’d also written “Chili missing.” With no fresh fish coming off a deep-sea fishing boat today, I needed another fish source pronto.