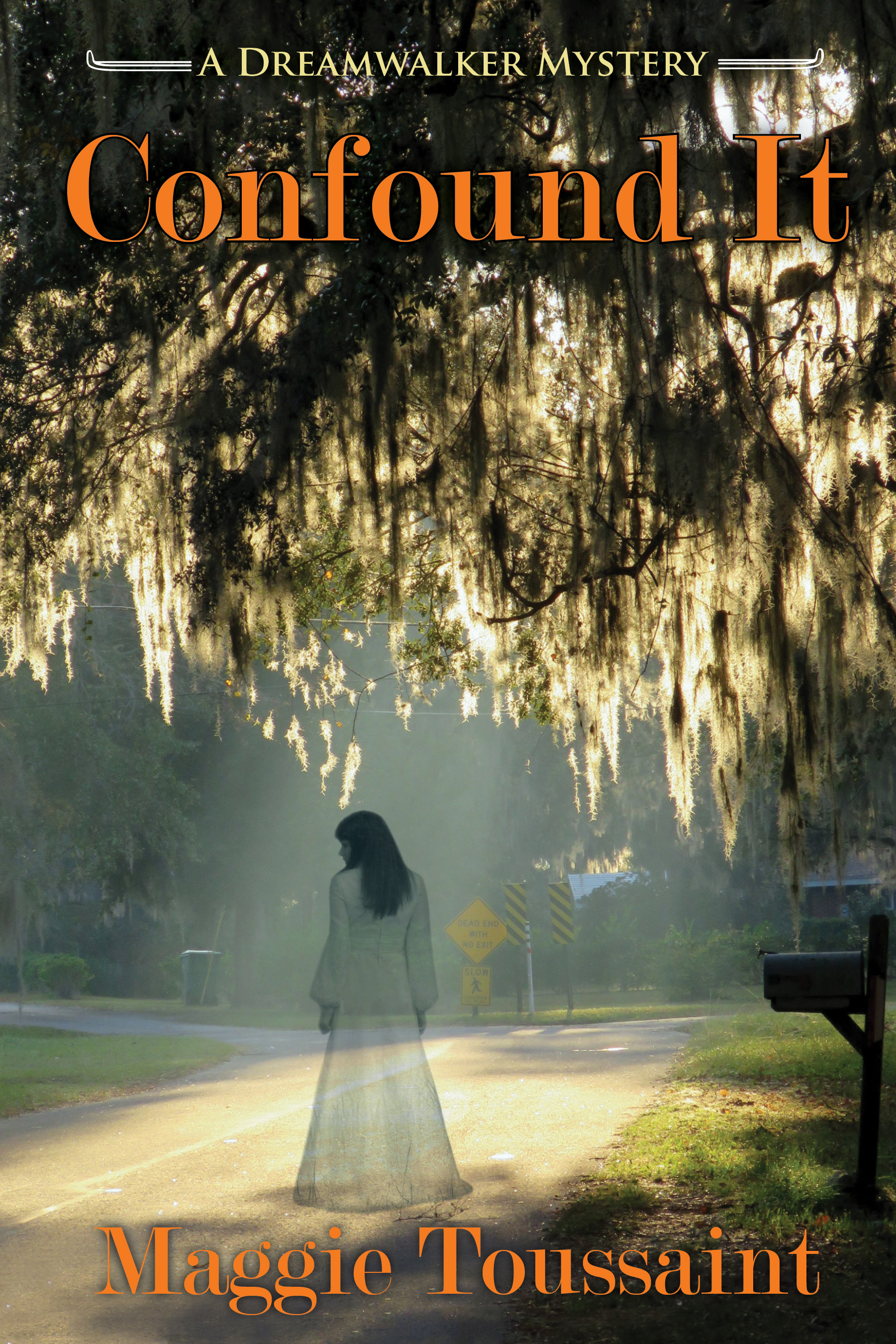 While hosting out-of-town guests at her Georgia home, Dreamwalker Baxley Powell is called upon to help investigate a suspicious fire. One of her guests, close friend and fellow dreamwalker Deputy Sam Mayes, accompanies her to the scene.

A meth cook is dead, and when Baxley visits her beyond the Veil of Life, she determines that the woman was murdered. Baxley pities Mandy Patterson, a single mother with aspirations for her teenage son Doodle. Unconcerned about the death of a criminal, the authorities pursue the drug-supply chain angle. Baxley worries about Doodle and vows to find out who killed his mother.

As the case grows more baffling, Baxley struggles against her attraction to Sam. Although her husband is missing and declared dead, she does not feel free to love again until she is sure of his fate.

Two suspects have the strongest motive, but Baxley has reason to believe they are pawns in a deeper game. And unless she can stop them, the world will never be the same.

“In her fifth Dreamwalker novel, Maggie Toussaint pairs a tricky murder plot with her amazingly original supernatural setting–Confound It is a dream come true for fans of paranormal mysteries.” — Leigh Perry, Author of the Family Skeleton Mysteries

“The fifth book in Toussaint’s Dreamwalker series is fun and fast-paced. Those new to the series won’t have any trouble picking up the continuing tale of single mom Baxley Powell as she does her best to juggle everyday activities, run a landscaping business and handle the advances of a hot guy she very much likes, all while helping the local sheriff solve cases. Toussaint’s deft writing makes Baxley leap off the page. This may be a mystery, but the love Baxley shares with her daughter, her parents, her pets and her community shines throughout.”–RT Reviews

“Maggie has done it again in delivering another fast-paced and intensely intoxicating drama that had me completely enthralled, quickly became a page-turner as I could not put this book down until all was said and done. Something wicked happened that resulted in the death of Mandy and it’s up to Baxley and Mayes to transverse the other side to find a killer lurking that had deadly intentions. The natural pull of the scenery and the mystical world enveloped me in this gripping tale that pulled at every emotion imaginable as our heroine fought her own emotions in this multi-plot tome that became the catalyst in how this story was being told. Expertly written with engaging dialogue, the author kept me immersed in the realm of possibilities as step by step, each action created the path to the next which resulted in the strength and conviction of our heroine and her determination to bring justice for the victim. And the ending was so touching.
. .well done. This is the best book in this series and I can’t wait to see what new adventures awaits Baxley and her friends.” Dru Ann Love, book reviewer

“Overall, Confound It is full of surprises and borders on the fantasy or paranormal genre. Curl up on a rainy day and enjoy finding an escape in a Dreamwalker mystery series. Witty and thought provoking!”–Ind’Tale Magazine

“A complex, multifaceted read that holds many satisfying twists and turns even for the staid detective story reader. Confound It will prove hard to put down and surprising right up to its final revelations.” — D. Donovan, Senior Reviewer, Midwest Book Review

“Where to begin. Let me first say, as a privileged advance reader for this novel, I didn’t want the experience to end. I am a devourer of books, reading from beginning to end, but this is one I wanted to savor.
Baxley Powell is a Dreamwalker and as such, she is a psychic consultant to the police department. When a meth lab goes up in smoke, she’s called on to find out what happened. What happens next carries her through a maze of interconnected crimes and through a series of suspects to find out whodunit. The ending will surprise you. Assisted by the friend Baxley met in the last Dreamwalker book, she learns ever more about her “superpowers” that allow her to cross between the realms of the living and the dead. The two of them share a spiritual symbiosis which protects them and sharpens their skills. This book brings us the answer to “Who is the Watcher,” and oh, my beating heart, she finds resolution to her greatest desire – she finds out what happened to her missing husband, who has been presumed dead and who she refuses to acknowledge as such.
Expertly crafted, there are so many good things about this book, from the mystery of what happened to the meth lab, to love of animals, to protecting our children and wanting the best for them, love of family, and more. This book has earned a place not only on my e-reader, but also on my bookshelf in hard cover/paperback to be read again and again.”–Karla Brandenburg, author of the Epitaph series

Wayne turned from the fire chief. “Virg and Ronnie, you guys go next door and find out who lived here.”

Wayne shook his head. “What?”

“The Pig Woman. Jerk next door must’ve filed half a dozen complaints about her blasted pigs.”

“The woman with the pot bellied pigs?”

Wayne studied the ground a moment. “It’s coming back to me now. Mandy’s pigs turned up their noses at their pig-chow dinners, escaped under the fence, and got into the dog-food bag on the neighbor’s back porch. The guy nearly had an aneurism telling you about it, right?”

“Yep. Good ole Ricky Dixon. He’s wound tight, that’s for sure. If his wife wasn’t bedridden, he’d be a permanent bachelor because no woman would put up with his sh—, uh, stuff.”

“Head over there anyway. I want a statement from him about what he may have heard or seen. I want to know where those pigs are. Take Powell with you so I know if he’s lying.”

He was sending me away from the scene? I didn’t want him to think I couldn’t do my job. I pushed away from Mayes’ protective arm. “I can do it,” I said. “I needed a moment to prepare for seeing the body.”

Wayne snorted. “Sometimes I forget you’re a chick, Powell, but I can read you like a fast-food menu. This is the best use of your time. Dixon is important. He’s either a witness or a suspect, and I need your take on what he says.”

His words didn’t ring quite true. My spine stiffened. “I said I can do it.”

“Sure you can, but Mayes is a cop. He’s seen burn victims before. He’ll assist me because he wants in on the case. With the fire department’s approval, I’ll collect one or two personal items belonging to the victim, and you can go inside the place once we remove the corpse. Right now, I need you next door with my guys.”

Crap. I was being sent away on the “B” team. Simultaneously, Mayes had been promoted from spectator to “A” team. Good ole boy networks never died.

Though my pride smarted, I couldn’t deny I was glad to be granted a respite on the viewing. Wayne was doing me a favor, so I should hush and be gracious about it.

“Virg, let’s get that statement stat,” the sheriff said.

“Roger that, boss man.” Virg cocked his head at me. “You ready?”

I nodded and gathered my thoughts. I might not like being sent away, but I would do my assignment. As a police consultant, I needed to let my abilities be tasked however the sheriff deemed fit. Didn’t matter about the temporary demotion, I’d do my job. I would get justice for this victim.

“If this guy doesn’t cooperate, I’ll light him up with my Taser,” Virg announced as we trudged down the dirt road to the neighbor’s home.

Having been on the wrong end of Virg’s Taser before, I didn’t wish that experience on anyone. “You will not. The object is to gather information, not have this man sue the sheriff’s office. If he won’t talk to you, I want a crack at him.”

“No way he’s gonna talk to you. I’m telling you. This man’s crazier than a sprayed roach.”