The Trouble With Cupid

The Trouble With Cupid 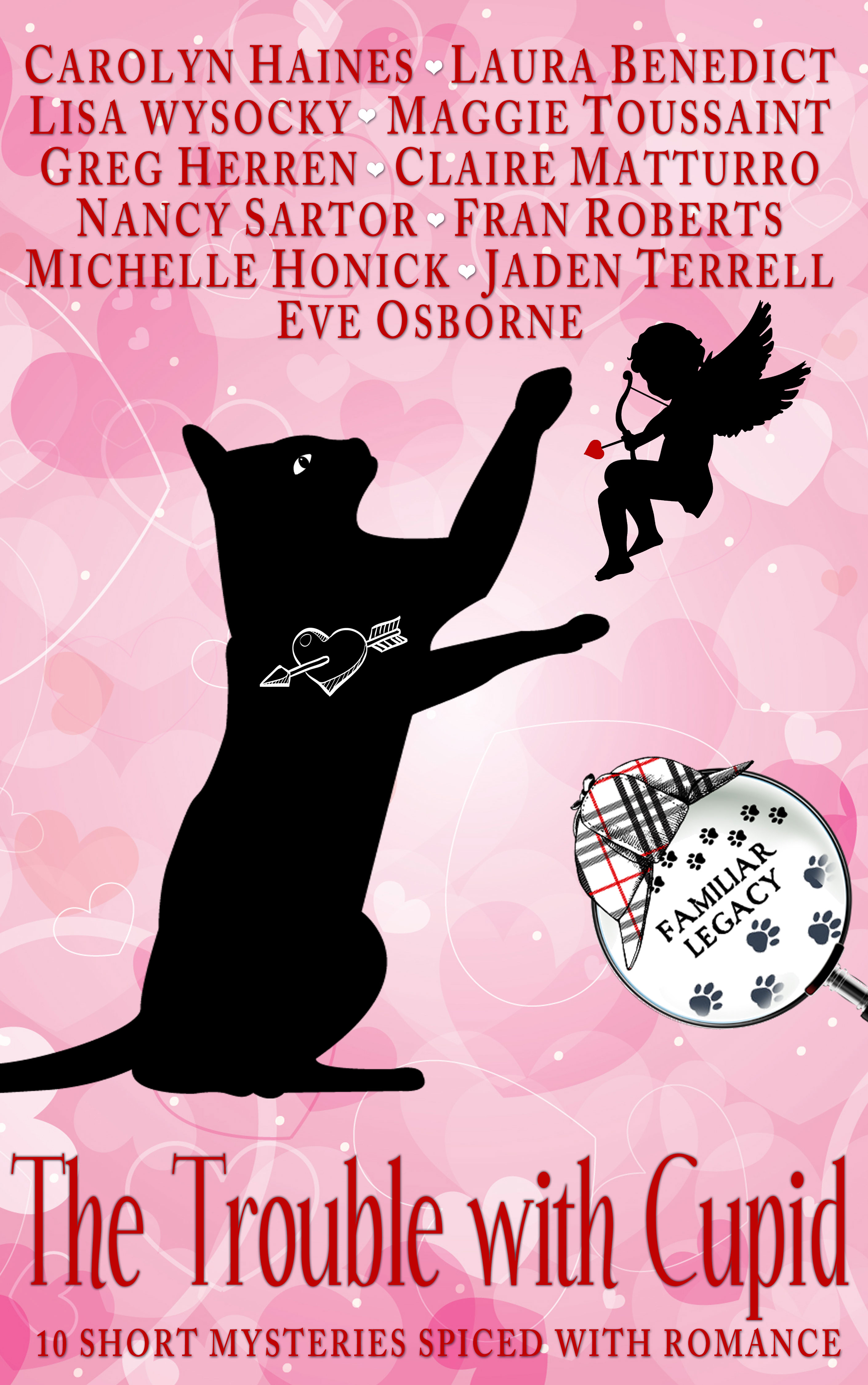 Fun-sized bites of Trouble, Cat Detective! All proceeds from the sale of THE TROUBLE WITH CUPID will be donated to Best Friends Animal Sanctuary. The famous black cat detective from Wetumpka, Alabama is at it again in this collection of sometimes poignant, often amusing short mystery tales. Bestselling authors Carolyn Haines and Laura Benedict lead the lineup with the sassy “Calling All Cupids” and the sweet “Of Mice and Munchkins,” followed by Claire Matturro’s heartwarming contribution, “The Madonna in the Garden.” With additional stories by eight other authors, including critically acclaimed veterans and exciting new talents, The Trouble with Cupid is a delightful offering of wicked fun for anyone who loves mysteries, cats, and a touch of romance.

The Trouble books are a multi-author coalition published by KaliOka Press with each mystery novel featuring Trouble, the black cat detective. All the full-length mysteries are available in e-format and print.

An excerpt from Maggie’s short story “Trouble with Horses”

My hands shook during the drive down the fence-lined lane to the big house and barn. The wonderful scent of horse coming through my van’s windows helped my frayed nerves. True confession time. I’m River Holloway and I’d contracted this catering job against my better judgment.

Pete Merrick broke my heart a year ago when he merged his security company with another and moved across the country. He knew my ailing mother depended on my care, knew I couldn’t leave her behind. At first, he called when he could, but his job took over his life. Three months ago, he became CEO of North Merrick Security Systems. Not that I’d kept tabs on him after he dumped me.

Was I ready to see my ex again? Enough time had passed that I should’ve moved on, but I’d been trapped in that tween place of anger and brokenness. I turned down this Valentine’s Day catering job, three times to be precise, until Pete offered an exorbitant rate. I hated that money trumped my pride, but my brother stole the mayor’s car after our mom’s funeral last month. Now he needed a lawyer and bail money. I was his only hope.

“River.” At the sound of Pete’s voice, my arms tightened instinctively around the marvelous paint. It’d been forever since I’d been near horses, but I longed to have one, and this gentle giant stole my heart at first glance. The affection seemed mutual, which is more than I could say for the man standing behind me.

His corporate dinner for six was prepped in my van, but my wafer-thin composure suddenly needed a pep talk. Pete chose work. He didn’t choose you. My eyes misted at the heartache these decisions still wrought, until I shoved the emotional chaos out of my mind and revisited my priorities. This isn’t about him or me. This is about earning the money to help my brother. Mom always said to try your wings and fly. This is me flapping my wings. This is me helping my brother.

I could do this. With a final pat, I released the horse and turned around, my gaze hungry for the sight of him. From his dark hair tamed into submission, to the tailored suit that flattered his broad shoulders and narrow waist, I was captivated. His gem green eyes radiated strong emotion that stirred up a swarm of butterflies in my belly. Would he try to mend fences? Would I let him?

“Hello, Pete.” I cringed inwardly at how wooden my voice sounded.

He stopped a few steps short of me. “It’s great to see you again, River. You look amazing.” My hands automatically flew to my hair, which had been perfectly confined in a clip before I had been drawn to this powerful gelding. Now, loose tendrils dangled in my line of sight. Not exactly the polished image I planned to present to my ex-boyfriend.

I smoothed them in place and dashed the horse hair from my jacket. I recited the lines I’d rehearsed on the three-hour drive west. “Thank you for the opportunity to cater your executive retreat. I hope you’re pleased with Holloway Catering.”

His eyes narrowed, and I picked up the black cat for moral support. “This is Trouble.”

He gave a lopsided smile. “It sure is.”

I frowned. “Have you met before?”

“I’m not talking about the cat. I’ve missed you, River.” He stopped calling two months after he left. Just stopped. I left three unreturned messages before I gave up on him. How was I to believe a word coming out of his mouth? Time to remind him of the ground rules.

“I agreed to take this job if we kept things on a professional basis.”

His easy smile faltered as a cab stopped in the circular driveway. He gestured toward the mansion. “As you wish. Dinner is to be served at five. Follow the drive around to the kitchen. I’ll have my security team unload the van for you. I hope you still like mysteries because after the meal, I need your help with one.” He was gone before I could object.