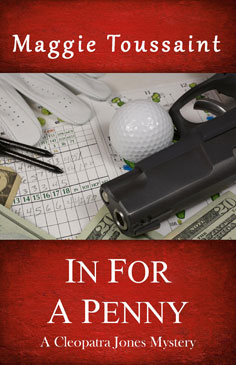 When irrepressible accountant Cleopatra Jones overshoots the sixth green, her golf ball lands in the biggest hazard of her life, the inseam of a dead banker. Murder rocks this small Maryland town and old secrets cast suspicion on Cleo’s best friend. Cleo sets out to prove her friend is innocent. Her sleuthing is hampered by her damaged instincts, a jumbo dog, and her wacky, engaging family. As head of the household, Cleo will do anything to protect her children.

“Set in Hogan’s Glen, Md., this witty cozy from Toussaint (No Second Chance) introduces Cleopatra Jones, accountant, avid golfer and single mother of two. A handsome golf pro’s offer of romance gives Cleo a boost as she deals with her mother, her children and the Saint Bernard dumped on her by her ex-husband . . . the story takes some unexpected and dangerous turns as it builds to a satisfying conclusion.”– PUBLISHERS WEEKLY

“Toussaint’s debut is a mildly amusing addition to the cozy ranks with possibilities for future development.” – KIRKUS REVIEWS

“Maggie Toussaint’s IN FOR A PENNY sparkles with wit and humor. Toussaint has created a small town filled with wacky characters and a sleuth–Cleo Jones–we can all relate to. She’s funny, she’s impulsive, and she’s finding that there really is life after divorce. That life includes her children, a mother who puts fish in lasagne, a gorgeous golf pro, two frisky Saint Bernards, and, of course, murder. Anyone looking for a really fun read will find it in IN FOR A PENNY” – Judy Fitzwater, author of THE JENNIFER MARSH MYSTERIES and NO SAFE PLACE

“Even a philandering husband can’t stop Cleopatra Jones, Maggie Toussaint’s delightful new sleuth. But when she whacks her golf ball smack dab atop a dead body on the sixth green of the local club, it does make her pause — just a tad. She hasn’t time to dwell on it, however. The police arrest her best friend, her ex-husband seems to be involved up to his devious eyebrows, and Cleo’s downright angry that her world has been turned upside down by him — again. So she revs into full damn-the-torpedos mode until she peels away layers of subterfuge from the seemingly placid suburbs and cracks a case that baffles the local police. What a terrifically engrossing, rib-tickling debut from a talented new author. Don’t miss it! ” – Barbara Cummings, award winning author of A KILLING ON CHURCH GROUNDS

“Reading a Cleopatra Jones mystery is a nice way to spend an afternoon. This lighthearted story has a dash of romance and a lot of humor. Cleo is a delightful character, and her wacky family and friends add to the enjoyment.”– ROMANTIC TIMES, 4 stars.

“Fans will enjoy this amateur sleuth as the heroine displays her moxie and loyalty by investigating the homicide expecting to prove her best friend is innocent. However every clue Cleo finds adds a nail to the case against Jonette. Fans will enjoy this fun mystery wondering whether the golf pro, the ex husband or no one will score with the heroine.” —Harriet Klausner, reviewer, Five stars

The golf course is one of the few places I don’t have to pretend. Oh, I still give the socially correct answer of “fine” when asked how I am, but I am not fine. There’s enough anger churning through my gut to fuel a volcano.

Golf therapy is how I’m relieving my stress. I imagine my ex-husband’s face on every ball I hit, and when I’m done, I’m almost fine.

My name is Cleopatra Jones, Cleo for short. Self-employment allows me to spend my Wednesday mornings playing golf in the Ladies Nine Hole Golf League. So far in today’s round, I hadn’t experienced any signs of rebirth into a nicer, perkier thirty-five-year-old, but I hadn’t given up hope.

Sunbeams danced around me on the number six ladies tee of the Hogan’s Glen Golf Club as I aimed my shoulders at the distant flag. I swung hard. My tee shot hooked left into the trees lining the fairway.

I whacked my driver against the ground. Exorcising Charlie through golf was therapeutic to my mental health, but it was hell on my golf score.

“Provisional ball,” Jonette Moore suggested. People thought of Mutt and Jeff from the comics when they saw us together because I was tall and slender while she was short and stacked. I’d known Jonette since forever, a fact she never let me forget.

Jonette’s tee shot taunted me with its perfect lie in the middle of the fairway. By mutual agreement we’d decided that the winner of the previous round got to drive the golf cart. I can’t remember when I last drove Jonette around the course.

“Looks like you’ll be buying more golf balls,” Jonette said with a smirk.

I’d used up my late father’s lifetime accumulation of golf balls during the first year of my golf therapy. If I didn’t find either of my tee shots, I’d only have one ball left for the remaining three holes. Not good. “I’ve been over there before. The underbrush isn’t too thick.”

“Have you given any more thought to going out with that lawyer friend of Dean’s?” Jonette asked as we zipped towards the woods. Dean was the current man in Jonette’s life. He was also her boss at the tavern where she waited tables.

The thought of dating twisted my stomach in knots. “Sure I’ve thought about it. And the answer’s no.”
“Damn you, Cleo.” Jonette waggled her finger at me. “Don’t let Charlie win.”

My ex hadn’t won. I was being cautious. I wasn’t giving up. Who said I had to jump back in the dating pool right away? The view from the high dive was terrifying. “I’m not ready.”

“Maybe some hot guys will move into White Rock. I wouldn’t mind checking them out for you.”

“That development is wishful thinking and you know it.” The much-hyped new subdivision on the old Wingate farm had stalled in the bulldozer phase of construction.

“You need to get out of that house.”

“If I wanted to get out of the house, I should take a golf lesson so I don’t spend half my round scouring the woods for my balls.”

“There’s an idea.” Jonette beamed her approval. “The golf pro is definitely hot.”

I sure wished Jonette would get off this dating kick. “Don’t go getting any ideas. I’m not interested in dating.”

“You may be right about Rafe Golden,” Jonette said. “He’s supposedly slept his way through the women of the club. But, he’s a such a hunk.”

“I don’t want a man that reeks of sex appeal. If I ever dated again, I’d want someone like me. Hardworking, loyal, trustworthy, family oriented, and obedient.”

Jonette’s mouth gaped. “Where’s the excitement in that? You need someone to sweep you off your feet.”
I leveled my sternest gaze at her. “Forget it.”

Jonette rolled her eyes and huffed her disapproval.

Too bad. If I could erase Charlie from my life, I would, but his weekend visitations with our two daughters put him on my schedule every week.

Shedding Charlie was more difficult than getting fungus out from under a toenail. Just when you thought you had the problem solved, there it was again.

Jonette stopped the cart near where my balls had disappeared into the woods. “Should I help you look?”

“Stay put.” I waved her back in her seat. “I won’t be responsible for you getting poison ivy again.”

I marched into the thicket alone, kicking through last year’s musty leaves as I searched for my golf balls. A gleam of white beckoned in the honeysuckle-scented shade ahead.

Both balls lay adjacent to each other. That brought a fleeting smile to my face. Hell, if I couldn’t hit straight I’d settle for consistent. “Got ’em,” I called to Jonette as I pocketed my provisional ball.

A massive maple stood between me and the number six green, blocking forward progress. I had no choice but to chip out of the rough and hope for distance on my next shot. Of course if I missed and hit the slender trunks of the myriad of smaller obstacles between me and the fairway I’d quite possibly lobotomize myself. Fair enough.

I marched back to the cart and selected my pitching wedge. “You might want to back up the cart while I hit.”

“Won’t do it.” Jonette smoothed her flirty little red golf skirt. “But you hit me and you are one dead dog.”

Back in the woods, I took aim at Jonette and whaled away. My ball skimmed over the top of her head and landed in the center of the fairway.

Success tasted sweet in my mouth. “Hot damn! I’m on a roll.” I jogged back to the cart and noticed Jonette had a death grip on the steering wheel. Served her right. I thumped her on her back.

She choked in a breath of air. “Didn’t think you had it in you, Cleo. Nice shot.”

I was still furthest from the hole, so I exchanged my wedge for a seven iron. In truth, I didn’t see the point of having so many clubs in my bag when my trusty seven worked well for any occasion. I took a deep breath and swung easy.

My ball landed twenty yards ahead of Jonette’s. Counting all my strokes, I lay three to her one, but that was beside the point. If the world ended right this minute, my ball would still be closest to the pin. That was worth a lot.

The golf gods must have taken a lunch break because my next shot zoomed over the green and down a steep embankment. I grabbed a club and started down the hill.

Jonette followed, sniffing tentatively. “Do you smell something?”

I did. My eyes watered at the latrine-like stench. It wasn’t unusual to smell something ripe this time of year in Maryland. The odor could be anything from farmers manuring their fields to the groundskeeper’s natural fertilizers. “No telling what that is.”

Using my golf club as a cane, I crabbed sideways down the hill, scoping the terrain near my feet for my ball. At the base of the hill, I saw something that resembled a bundle of clothes.
A huge lump formed in my throat. “What is that?”

“I’ve got a real bad feeling about this,” Jonette said.

“You and me both.” The closer I came, the more certain details stood out in my mind. I saw that the bundle of clothes was actually an expensive business suit. Pinstriped trouser legs were rolled up to reveal dark crew socks and black-and-white golf shoes.

The man lay on his back staring straight up at the cloudless sky. Between his slate-gray eyes was a dark circular wound. Bloodstained grass framed his lifeless head in a grotesque abstract shape, as if some wicked cartoonist had thought to ink in the conversation.

Only there was no conversation coming from this person. He was dead. Very dead.

My personal problems receded in a heartbeat. I fought down dizzying nausea as I felt my blood charge through me like a speeding freight train. I wanted to run and get far away from this grisly scene, but my feet weren’t listening.

I knew this man. He was my ex’s best friend and coworker down at the Hogan’s Glen Bank. His name tumbled from my lips. “Dudley Doright.”