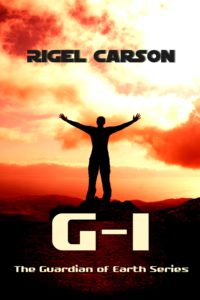 Though plague, locusts, and earthquakes riddle 2065 Earth, Dr. Zeke Landry focuses on the world’s vanishing water supply. When his uncle disappears, Zeke abandons his hydrology research to find Uncle John. His efforts land him in deep trouble. The Chameleons, a secret society, believe Zeke has the keystone, an object of great power. This group has already murdered in its quest to find the keystone, so if Zeke can’t produce it, his hours are numbered. Time’s running out for Zeke … and the world.

Footsteps stopped nearby. A shadow fell across Zeke’s body. He turned to gawk at the gigolo robot.

It grinned at him. “Sir, I believe you’re expecting me.”

Zeke blinked, aware that every person on the platform was watching him converse with an oversized sex toy. “You’ve mistaken me for someone else. Move along.”

“No mistake, unless you’re not Dr. Zeke Landry, super brain and ultra cool guy?” Zeke ignored the flattery. “I ordered a Bob. Not a Gary. Never a Gary.”

The A.I. unit cocked its head to the side like an inquisitive parrot. Genetically altered human skin and hair covered the artificial life form’s inner machine, which were maintained at a precise ninety-eight point six degrees. “Sir, my programming—”

Zeke’s hand shot up to silence the bronzed Adonis. He was not amused. Leaning in, he read the name inscribed in gold on the mandatory identification collar. “Forman. While I’m sure your programming is extensive, I’m not looking for a hookup. My request was for a laboratory unit to assist in my hydrology research. Catch the next tube back to Hollywood.”

Forman’s blue eyes widened and his head bobbed back, a perfect mimic of human disbelief. “Sir, I can explain—”

“Not interested. Excuse me.” The hovercraft would dock any minute now, and Zeke’s com link wouldn’t work in transit to Tama Island. Turning his back on the robot, Zeke hailed Supply Central on his wrist com. After being routed through six automatic menus, he reached an interactive prompt. “This is Dr. Zeke Landry.” He sucked in a breath, and fury flowed out on the exhale. “You have a big problem. You shipped me the wrong unit.”

“Sorry for the error, sir,” the androgynous voice soothed. “Do you have your authorization number?”

“No, I do not have my authorization number. I’m standing on a pier notifying you of your screw-up. I need it corrected immediately.”

“One moment while I query requisitions.” The silky voice returned. “Sir, we were unable to fill your request, and due to your Level Five priority, shipped you an alternate unit. You are dissatisfied with the Forman?”

The leaden clouds offshore and the changing barometric pressure aggravated his headache. “You sent me a mechanized gigolo. I need a research assistant. Where’s the Bob robot I requested?”

“We show a two-month backlog on the Bobs. Rest assured we will fulfill your request when possible. Our inventory will replenish once the World Collective approves the Ginright circuitry modules. Unlike the defective Bobs, Forman has been extensively mapped and shows no killer tendencies.”

Did they think their standard reply would placate him? Zeke’s voice sharpened. “Two months? Hell, I waited a month for the boy toy you sent. I have critical deadlines to meet. Besides, this killer robot myth is a giant hoax.”

“Your request is in the system, Dr. Landry,” the voice soothed again. “In the interim, the Forman unit will assist you.” “Christ.”

He broke the com connection. Across the lush fields of cord grass, a gleaming white hovercraft approached the wharf. The ferry would dock soon. He needed time to assess the situation. He had none. His sponsors pushed hard for conclusive results. Even with his three-hour sleep pattern, he couldn’t finish the global hydrology computations before the International Water Summit.

His uncle had promised skilled help. And now this sex toy had been assigned to him. An unusual error for Uncle John. Zeke turned to study the robot. No way this pectoral wonder in a vivid pink shirt dotted with white palm trees knew a thing about science.

As Zeke watched, the unit gave two passing women the once over. An athletic male got the same treatment. He was so screwed. The publish or perish mentality ruled the research field. Once he missed his deadline, his sponsors would bail. Then what? Back to making his living as a fisherman in the dying sea?

He had a few minutes. Better make good use of them. He crossed to Forman. “Is light a particle or a wave?”

“Ah, good one, doc,” Forman said. “Start me off with an easy chicken or the egg question. As it happens, I know the answer to this. Both. Stick that in your pipe and smoke it.”

“I don’t smoke. And neither should anyone. It’s bad for health and longevity. Not to mention illegal unless prescribed for medical reasons.”

“Right. Medical reasons.” Zeke ignored the flirty wink that came his way, intent on his line of questioning. “Do rapidly shifting tectonic plates cause stronger earthquakes?”

“Yes, they do, though it depends on the fault.”

Zeke felt a spark of hope. This robot’s looks weren’t his only asset. “What common contaminant in underground water poisoned Florida’s bay in the 1990s?”

“That would be phosphorus. Any more questions, Dr. Geek, or do you want us to continue working on our tans on this quaint wharf?”

“I don’t appreciate your sense of humor.” “That’s because you don’t have one.”

“So I’ve been told.” Zeke managed a wry smile. “What are you? You look like a Gary but you sound like a Bob.”

“I’m a prototype for robotic units. Every time there’s a demand for a new A.I., they muck with my programming.” Forman grinned. “Right now I’m in full nerd mode, but I can score us some action in a nanosecond. What do you think about the hottie blonde and the even hotter dark-skinned vixen with the beaded braids by the ticketing kiosk?”

Zeke’s gaze shot over to the women in native orange robes. His second cousin and her mainland friend with a shrill voice. “God, no.”

“Don’t like girls? Got it. What about those two deckhands over there? They look like a ton of fun.”

His throat tightened. “No action of any kind. I have work to do.” Forman blanched. “No wonder your sense of humor is gone. A guy needs action. Too much congestion down there rots your brain.”

“My brain is fine.” A facial muscle twitched, and he clamped his hand on top of it. “If I decide to accept your help, and that’s a big if, you have to tone it down several notches. We keep a low profile, understood?”

Forman leaned closer and spoke confidentially behind his hand. “So I’m in like Flynn?”

Zeke looked away. An ocean breeze swept across the ferry landing. The warm, salt air bathed him with a sense of the inevitable, much like the landward march of seawater. With every inch the sea took, the water came closer to human structures and drowned the salt marsh that fed the bottom of the food chain.

The island hovercraft docked, and two dozen travelers spilled onto the platform. About half of them wore the traditional orange garb of island folk. Strangely, many faces were unfamiliar to him. He had to make a decision about the robot. If he refused the A.I., he’d be back where he started, doing the work of three men. That wouldn’t get the job done in time. He needed help.

With a sigh, he resigned himself to the inevitable. “We’ll try this for a few days,” he said. “Nothing permanent, mind you. This is a trial basis.”

“Cool.” Forman puffed out his chest. “I’ve never been on an island before.”

“We’ll be working around the clock. This is no R&R gig.”

Zeke sighed. “What are your recharge requirements?”

“I’m functional around the clock, but a daily one-hour rest cycle is optimal for my operating system.” “Got it. Let’s go.”

“Wait. What about my bags?”

Forman pointed to the tower of brightly colored suitcases stacked by the loading dock. “Wardrobe is essential, and I knew there were no clothing outlets on the island.”

“True. But you won’t need more than a change of clothes, if that.”

Forman drew himself up to his full height, two inches taller than Zeke. “My bags travel with me, or I don’t go.”

Zeke swore under his breath. He flashed back to an argument he’d overheard between his parents many years ago regarding his accelerated education. After days of arguing, his father had allowed tutors for Zeke in their island home. He’d said he’d it was important to know which battles to fight.

Zeke applied that lesson to the A.I.’s luggage. “Knock yourself out.”

Forman beamed and hugged Zeke. “I knew you’d come around. We’ll be a great team.”

Zeke quickly disentangled himself, hearing the chortles from others on the platform. “No hugging.”