1. What if a young mother found a lucrative way to provide a future for her son, but then couldn’t get out? Soon she becomes a homicide statistic. We automatically look at what she did-making drugs-and label her a bad person. Now that you know character Mandy Patterson’s backstory, do you feel empathy for her? Do you think others care if a meth cook dies?

2. A man she met on vacation, Deputy Sam Mayes, visits my sleuth Baxley Powell and her family. Like her, the man has extrasensory abilities, and she wants to learn from his experiences. He, on the other hand, is abiding by her lets-be-friends decree, but he’s made it clear he’s interested in a romantic relationship. As a woman, would you pursue the friendship?

3. For the longest time, Baxley has lived in relationship limbo. Her elite soldier of a husband went missing on a military mission. After a year went by, the Army declared him dead. As someone who can traverse the Veil of Life, Baxley knows he isn’t dead, only she can’t find him in the land of the living either. She worries he’s hurt. That’s the only way she knows that he wouldn’t come home to her and their young daughter. People say she should start dating again, but Baxley is married. Her honor and integrity demand that she honor her vows. What would you do in that situation?

4. In-laws and Outlaws is a phrase I’ve often heard applied to some extended families. In Confound It, discord rules amongst the victim’s family members. There’s love, but there’s also envy, greed, jealousy, and lust. Does your family always get along? What’s the usual bone of contention? Examples: curfew, bedtime, heirloom, elder care, employment, authority, money, respect…

5. We expect those who care for us to comfort us when troubles occur. But Confound It’s Mandy Patterson is trapped in a desperate situation, and she’s afraid of her boyfriend. What advice would you give someone like Mandy?

6. In Confound It, Mandy’s sister makes no bones that she wants what her sister has, only June is mostly talk and no action. Plus, she believes the world owes her. She gets mad when Mandy won’t continue to give her money. Do you believe in Tough Love? Why or why not?

7. My sleuth Baxley Powell is a Dreamwalker. She taps into her extrasensory abilities to learn more about a person, place, or thing in this world or the next. In reality, psychics often have one strong extrasensory skill. In the Dreamwalker Series, I take liberties so that Baxley explores a new paranormal aspect in each book. Confound It is book five in this series. Usually in other books, she must hold an item of the victim to make contact with his or her spirit. In this book, Baxley has several spontaneous visions causing her no end of confusion. What characteristic of Baxley’s do you most admire and why? (Her traits include loyalty, adaptability, courage, patience, composure, self-sufficiency, perceptiveness, honesty, fairness, or her curiosity).

8. Deputy Sam Mayes is a Cherokee. He carefully treads his way in both his native world and the white man’s world. Baxley doesn’t understand the issues he faces, doesn’t know how hard he is to appear to be solidly in both worlds, or that it costs his tribes when he is less than fully theirs. Assimilation used to be the American Way. Our society is a melting pot of immigrant groups. Why does assimilation hurt Native American tribes? Don’t people have to live and make a living in the twenty-first century?

9. Baxley’s household has a menagerie of animals: a Shih-Pooh named Muffin, a chihuahua named Elvis, black lab named Maddy, a Maine Coon cat named Sulay, and a tabby named Ziggy. Her ghost dog, Oliver the Great Dane, puts in appearances now and then. Occasionally, one of her pet-sitting clients leaves their animals with her, so she has even more animals at home. With such a variety of dogs and cats, which animal is the boss and why?

10. In a series mystery like this one, as the series goes along, the amateur sleuth gains more of a familiarity with the criminal world, though she still says firmly grounded in her community. Although Baxley has gained experience as a dreamwalker, one of her abilities, being able to perceive lies, happens automatically. This can be a bonus for her police work, but this (and her other skills) makes people leery of her. If you had a special skill that made people nervous, would you use it or hide it?

Join me at Writers Who Kill blog on June 6, 2018, for an entertaining blog interview on how did you put this book together. You’ll find behind the scenes dirt you always wanted to know about the Dreamwalker Series and Baxley Powell and her friends. Some of the questions made me stop and think before I could answer them. There are times, not saying all the time, but certain times when ideas come together in such a way as to look premeditated. I wouldn’t say that I purposefully insert themes or layer conflict in this book or any book, but somehow it happens and it works. Elaine pushed me to articulate the process and the ideas behind the story. Here’s the link: https://writerswhokill.blogspot.com/

Join me at Dru’s Book Musing today, June 3, 2018, as she reveals her take on Confound It, book 5 in my Dreamwalker Mystery Series. There’s also an in-depth interview of my protagonist, female sleuth Baxley Powell, and she’s really telling all! www.drusbookmusing.com There’s a giveaway!

Please join me on Friday, June 1, from 7-8:30 pm EDT, to launch Confound It. I’ll be on the Book Launch Party page I share with author Nancy J Cohen, https://www.facebook.com/newreleaseparty  There’ll be prizes and fun activities! I hope to see you there!!!

Hold onto your hats! The Great Escapes Blog Tour for Confound It starts June 1 and runs through June 14.

Copy the list to have it handy, and then click on over on the right dates! I’d love to see you. There are Rafflecopter Prizes as well.

Thank you, Lori Caswell for setting this up! Mystery authors love you!

Join me at the Killer Nashville blog on May 22 where I’m discussing villains. We often think of the bad guy second when we’re working on characterization, but we benefit when we take a different approach. I give behind the scenes information about my forthcoming release, Confound It. I hope you’ll join me at the conference’s website blog: https://killernashville.com/blog/ 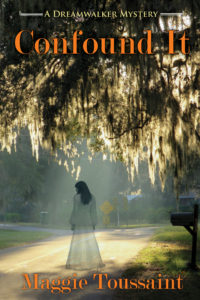 A meth cook is dead, and when Baxley visits her beyond the Veil of Life, she determines that the woman was murdered. Baxley pities Mandy Patterson, a single mother with aspirations for her teenage son Doodle. Unconcerned about the death of a criminal, the authorities pursue the drug-supply chain angle. Baxley worries about Doodle and vows to find out who killed his mother.

As the case grows more baffling, Baxley struggles against her attraction to Sam. Although her husband is missing and declared dead, she does not feel free to love again until she is sure of his fate.

Two suspects have the strongest motive, but Baxley has reason to believe they are pawns in a deeper game. And unless she can stop them, the world will never be the same.

© Copyright 2018 – Maggie Toussaint
Wayne turned from the fire chief. “Virg and Ronnie, you guys go next door and find out who lived here.”

Wayne shook his head. “What?”

“The Pig Woman. Jerk next door must’ve filed half a dozen complaints about her blasted pigs.”

“The woman with the pot bellied pigs?”

Wayne studied the ground a moment. “It’s coming back to me now. Mandy’s pigs turned up their noses at their pig-chow dinners, escaped under the fence, and got into the dog-food bag on the neighbor’s back porch. The guy nearly had an aneurism telling you about it, right?”

“Yep. Good ole Ricky Dixon. He’s wound tight, that’s for sure. If his wife wasn’t bedridden, he’d be a permanent bachelor because no woman would put up with his sh—, uh, stuff.”

“Head over there anyway. I want a statement from him about what he may have heard or seen. I want to know where those pigs are. Take Powell with you so I know if he’s lying.”

He was sending me away from the scene? I didn’t want him to think I couldn’t do my job. I pushed away from Mayes’ protective arm. “I can do it,” I said. “I needed a moment to prepare for seeing the body.”

Wayne snorted. “Sometimes I forget you’re a chick, Powell, but I can read you like a fast-food menu. This is the best use of your time. Dixon is important. He’s either a witness or a suspect, and I need your take on what he says.”

His words didn’t ring quite true. My spine stiffened. “I said I can do it.”

“Sure you can, but Mayes is a cop. He’s seen burn victims before. He’ll assist me because he wants in on the case. With the fire department’s approval, I’ll collect one or two personal items belonging to the victim, and you can go inside the place once we remove the corpse. Right now, I need you next door with my guys.”

Crap. I was being sent away on the “B” team. Simultaneously, Mayes had been promoted from spectator to “A” team. Good ole boy networks never died.

Though my pride smarted, I couldn’t deny I was glad to be granted a respite on the viewing. Wayne was doing me a favor, so I should hush and be gracious about it.

“Virg, let’s get that statement stat,” the sheriff said.

“Roger that, boss man.” Virg cocked his head at me. “You ready?”

I nodded and gathered my thoughts. I might not like being sent away, but I would do my assignment. As a police consultant, I needed to let my abilities be tasked however the sheriff deemed fit. Didn’t matter about the temporary demotion, I’d do my job. I would get justice for this victim.

“If this guy doesn’t cooperate, I’ll light him up with my Taser,” Virg announced as we trudged down the dirt road to the neighbor’s home.

Having been on the wrong end of Virg’s Taser before, I didn’t wish that experience on anyone. “You will not. The object is to gather information, not have this man sue the sheriff’s office. If he won’t talk to you, I want a crack at him.”

“No way he’s gonna talk to you. I’m telling you. This man’s crazier than a sprayed roach.”